Heavyweight boxing champ Wladimir Klitschko and his fiancée Hayden Panettiere, star of ‘Nashville,’ have been dating for over six years.

Here is what you need to know about Wladimir Klitschko and Hayden Panettiere’s growing brood:

1. Wladimir Klitschko and Fiancée Hayden Panettiere Have a Baby Daughter

Baby Kaya was born to proud parents Hayden Panettiere and Wladimir Klitschko on December 9, 2014. Panettiere, who was in the middle of the third season of ‘Nashville’ at the time of the birth, had continued working throughout her pregnancy.

“Motherhood is the most beautiful, exciting thing, and there’s nothing that I feel like I can’t accomplish while having children in my life,” the first-time mother told US magazine.

2. Despite Her Parents’ Extreme Physiques, Baby Kaya Was Normal Size at Birth

Predicting her baby’s height, Panettiere told Ellen DeGeneres: “[Klitschko’s] got bowlegs and I’ve got knock-knees, so they’re going to have straight legs. And they’ll be normal height.”

She got the height part right. Despite Wladimir’s towering 6-foot 6-inch stature and Hayden’s petite 5-foot frame, Baby Kaya come into the world at an average weight of 7 lbs., 14 oz. and measured 20 inches.

Watch a very expectant actress frolic in the water:

3. Hayden Panettiere Describes Motherhood as an ‘Out of Body Experience’

Appearing recently on Good Morning America, Hayden Panettiere gushed about her baby girl and about being a mother.

“You just reprioritise, and you hear that they’re healthy and you don’t care about yourself anymore,” Panettiere told Lara Spencer. “I mean, it’s the most out of body experience where you go, ‘I will completely lay myself on the line for my child,’ without even a hesitation.” 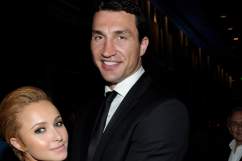 4. Plans for a Second Baby?

Things must be going well for the new parents, since they are already talking about making a big sister out of Baby Kaya!

They continued that Wladimir “loves being a dad and wants to start trying again ASAP.”

Don’t look for a titanic size wedding anytime soon for this giant among giants.

“I think that, Kaya, our daughter, has connected us forever,” Wladimir told US Magazine. “And that’s the most amazing thing. Everything else is coming, it’s something that needs to be planned … but as I said, the connection with the child is better than any marriage!”