If you missed the TV premiere of Killing Jesus last weekend, the three-hour special based on the best selling book by Bill O’Reilly and Martin Dugard is being screened on Easter Weekend on the broadcaster’s spiritual home, the Fox News Channel.

It will be aired on:

The National Geographic Channel’s adaptation of the book, which charts the political and historical conflicts leading to The Crucifixion, nabbed a record 3.7 million viewers on Sunday, the biggest audience in the network’s history, and will air globally in 171 countries and 45 languages, according to Deadline.com.

Here’s a look behind the scenes with the filmmakers and actors. 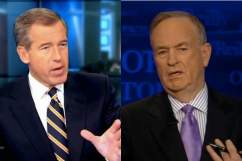