One of the stars of 90s staple Baywatch was arrested in Los Angeles back in March in relation to a bizarre stabbing. Jeremy Jackson, 34, is accused of wounding another man with a knife after an argument. According to the LAPD, the victim identified his attacker as “Hobie” to police. Hobie was the name of Jackson’s character in Baywatch. On the show, he was Mitch Buchannon’s (David Hasselhoff) son. Since then, he’s had a colorful, difficult career.

CBS Los Angeles reports that Jackson was released the day after his arrest on a bail of $30,000. He’s charged with assault with a deadly weapon. The station says that the incident happened in the Ramparts section of Los Angeles.

2. The Victim Was Stabbed in the Chest

When police were called to the Los Angeles County-USC Medical Center to interview the man who had been stabbed, the victim told police that he had been stabbed by “Hobie,” reports the Los Angeles Times. The attack happened after the pair were arguing on the stree. What the two were fighting about hasn’t been revealed by police. The man was stabbed in the chest.

3. He Was Arrested After He Returned to the Scene of the Crime

Jackson was arrested the day after the stabbing, according to the Times, when police got a call about a “prowler” on South Union Avenue, along the same block where the stabbing occurred. Cops had been searching for Jackson in relation to the stabbing.

4. Jackson Has Been Open About His Meth Addiction in the Past

In an episode of VH1’s Confessions of a Teen Idol, he bragged about beating Leonardo DiCaprio for the role of Hobie in Baywatch. This claim was backed up by David Hasselhoff.

5. In January 2015, He Was Kicked Off of a UK Reality Show for Exposing a Woman’s Breasts on TV

Back in January 2015, Jackson appeared on the UK version of the reality show Celebritiy Big Brother. He was removed from the show after he exposed the breasts of a female contestant on the show. During the incident, Jackson ripped open the dressing gown of model Chloe Goodman. He admitted he was drunk during the incident but didn’t use it as an excuse. Jackson received a caution from police in the United Kingdom as a result. As he was appearing on the show, the Daily Mail reported that in August 2014, Jackson had been arrested and faced charges of attempted murder relating to his ex-fiancee, fitness model Loni Willison. The charges were dropped when she decided not to pursue. But in the original police report it said that Jackson told her “I’m here to tell ya I wanna kill ya.” He then pounced on her while she lay in bed, attempting to strangle her. 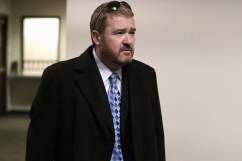