Though she is not a singer, the musical producer Gerardo Quiroz was surprised with her voice. He told La Opinion, “Besides her beauty and talent as an actriz, Marjorie will surprise a lot of people, she is very in tune, with a very special voice and very sensual when she sings.”

In the musical, De Sousa will be singing a song by the late Selena Quintanilla. Right now, the show is on tour in Mexico and will eventually come to the United States. They haven’t release the dates yet.

This year, the actress was able to make one her dreams come true. She sang “Te hubieras ido antes” on stage with her favorite singer Julion Alvarez. De Sousa told Primicia, “I’m the type of person that likes challenge, but not against other people, within myself. To be able to come out from my comfort zone is like a gift for me.”

2.Kendra Ferreti is her Best Villain

De Sousa has played many villains. Kendra Ferreti is one of our favorite villains from Amores Verdaderos. This was her break-out character in Mexico. She even won a TVyNovelas award for Best Villain. After Kendra, Mexico opened its doors to De Sousa and gave her, her first protagonist role in Hasta el Fin del Mundo.

The Venezuelan beauty has been romantically involved with co-stars Julian Gil and Eduardo Yanez. De Sousa and Gil had a relationship while they were filming Isla Paraiso in 2007. Gil told Univision, “We had something beautiful and it ended well, it was a mutual agreement.” After the breakup, the couple worked together again in Hasta el fin del mundo and Gil said that since they ended it good terms it made it easier to film together again “if not it would be a torture.”

At one point she was married to Venezuelan actor Ricardo Alamo, in 2005, but it ended in divorced.

4. She Started Working at 12 Years Old

The actress started filming commercials at the young age of 12 in her country. She also did some modeling growing up and enter the beauty contest Miss Venezuela in 1999. She didn’t win. Then she decided to go for acting and debuted in her first telenovela in 2000, in Venezuela.

5.She was Bullied as a Child

De Sousa didn’t have any friends and she was bullied. The bullying started because she was very skinny, wore glasses and braces. She told Nacion, “When I was bullied when I was a little girl. I only had one friend. I was very skinny, wore eye glasses, and braces; because of that they would bother me. They didn’t accept me in their group because I wasn’t like them and I suffer a lot.” 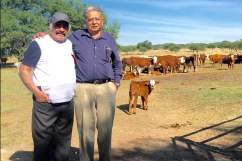 Roberto Esquivel, Vicente Fernandez’s doctor: How did he Save his Life 3 Times?