5⃣days and gross feet… ?? (Note to self… Wear shoes at all times at promo shoots)☝️?

Nastia Liukin and Derek Hough scored the first 10’s of season 20 on Dancing With The Stars and they continue to impress each week on the dance floor. While they have been overcoming many obstacles throughout the season, the two have managed to keep their heads above water to say the least. For all the info on Nastia Liukin and her DWTS pro Hough, check out our 5 Fast Facts below.

1. Liukin Has a Boyfriend

Nastia Liukin has a boyfriend named Matt Lombardi, while Derek Hough is reported to be single. Hough was last romantically linked to actress Kate Hudson, but the only woman he’s kissing is his New York Spring Spectacular co-star Lauren Benanti … and that’s because it’s in the script. For all the best info on Nastia Liukin’s boyfriend, check out the below link: 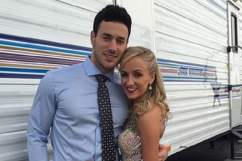 2. Currently, Liukin Is a Student at NYU

Nastia Liukin Balances 'Dancing with the Stars' and NYUNastia Liukin is already an Olympic champion and now she is going for gold on "Dancing with the Stars" while also finishing up her senior year at NYU. Nastia's five Olympic medals mirror her dance partner Derek Hough's five Mirror Ball trophies, so many are saying that they are the team to beat this season. Nastia took a break from her busy schedule to catch up with Fox 5.2015-03-04T23:06:00.000Z

Liukin is a student at NYU, studying sports management while she’s competing on Dancing With The Stars. She said she didn’t want to take time off of school while being on the show because that’s not who she is. Liukin is a fighter and a hard-worker, which is why she’s won so many medals as an Olympic gymnast. Check out how Liukin juggles school and the show in the above video via FOX News.

3. Henry Byalikov Is the Stand-In for Derek Hough

While Derek Hough is working on the New York Spring Spectacular or in other business meetings, dance pro Henry Byalikov, who we’ve seen on Dancing With The Stars in the past, is his stand-in. Hough will send Henry the choreography and he acts as another Hough. On the 18th season of DWTS, Byalikov was a pro contestant competing with swimmer Diana Nyad, but the two were the first ones eliminated.

4. Both Liukin And Hough Travel Back to New York Each Week From Los Angeles

Getting into our #Frozen characters with our friend Olaf #DisneyWeek #DWTS ⛄️❄️

One issue that Derek Hough and Nastia Liukin have had this season is sleep. Both Liukin and Hough have been traveling back and forth across the company to compete on the show, rehearse and then get back to work in New York. As Hough is starring with the Rockettes at Radio City Music Hall, Liukin is a full-time college student. They try to fit in rehearsals on both coasts and even in the air when in flight.

5. After DWTS Ends This Season, Hough Goes On Tour With His Sister

Dress rehearsals complete… We are ready to tango ? Tune in tonight @dancingabc at 8|7c and vote!! #TeamHoughkin

Last summer, Derek and Julianne Hough went on tour for their brother-sister dance show Move: Live On Tour. Again the two are going on tour together for the same show, but a whole new selection of routines and dances. Check out all the tour dates and tickets available by clicking here. 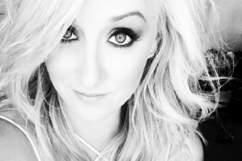 Nastia Liukin, ‘Dancing With The Stars’: The Photos You Need to See

Nastia Liukin & Derek Hough on ‘Dancing With The Stars’