Tonight is supposed to be a double elimination, but Buddy TV has reported that there will only be one person going home because Dancing With The Stars has its 10th anniversary show tomorrow. We’ll have to wait and see if this report is true. So, who do we think is on the chopping block this week? With many of the contestants excelling in their performances, the ones who have been a little slower in their improvements and have had missteps along the way are trailing behind in their scores. Last week, many were certain that Robert Herjavec would be voted off the show, but he was left to dance another week. Unfortunately, he had a small issue with timing once again and the judges noticed. Chris Soules has had his ups and downs over the season, some with timing as well. If two contestants are sent home tonight, our predictions are that we’ll sadly say goodbye to Herjavec and Soules unless there is a surprise cast-off. Should only one contestant be sent home, who do you think it will be?

Lately, both Herjavec and Soules have been in the media for their love lives. While Herjavec has been causing a media frenzy over his possible romantic relationship with DWTS partner Kym Johnson, Soules has been in the tabloids for rumors that his wedding has been called off. Despite the reports, Soules and his fiancee Whitney Bischoff have said that there is no wedding date yet because they’ve been waiting for the publicity roller coaster ride to end. Soules and Bischoff need time to adjust to real life together.

For more information on Soules and Herjavec, check out the below links: 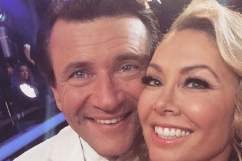