If you’d like to watch the 2015 MTV Movie Awards, the live show begins at 8:00 p.m. EST/ 7:00 p.m. Central, while the pre-show starts at 7:30 p.m. In order to watch the show online, you can visit the MTV website and download the MTV app, which is available for Apple, Android and via Windows. In the official description of the app, it reads that you can get inside access to the MTV Movie Awards, and watch real-time live stream coverage of the show and other events. Because the app is a general MTV app, you can watch your favorite shows and TV as usual once you’ve downloaded it.

To download the app via iTunes, click here. This app is good for both your iPhone and iPad.

If you’d like to download the app via the Microsoft store for Windows, click here. The instructions MTV has provided are: Watch MTV shows from your favorite Windows 8 device. Just sign in with your TV provider to watch recent episodes from select MTV series anytime and anywhere. Access is included with your TV subscription to participating providers. If your provider isn’t listed, don’t panic. We are working hard to get all TV providers to participate.

For more information on the 2015 MTV Movie Awards, check out the below links: 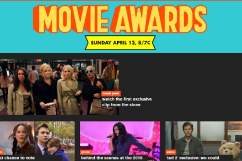 MTV Movie Awards 2015: What Channel and Time Is It On?