Undefeated UFC champion Ronda Rousey and Hollywood bad girl Michelle Rodriguez steal the show from the guys in the Easter weekend blockbuster in a fast and furious knock-down brawl in evening dresses and heels.

Ronda and Michelle don’t pull any punches in the explosive scene from Furious 7. “It was the first all out action scene all in heels and all the falls were on marble floors. Michelle had two goose eggs on her head and I was covered in bruises but it was so cool by the end of it. I was happy to take the bumps,” Ronda told People.com.

The epic fight scene was set in a billionaire’s penthouse in Abu Dhabi and it may not be the last we see of the glamorous cage fighter – she told eonline that her character, Clara, could return in further sequels to show off her MMA skills.

The movie – the last Fast and Furious movie to feature the late Paul Walker – was said to be on course for a massive $125 million weekend at the box office.

Including Furious, Rousey has now appeared in three feature films after playing herself in the upcoming Entourage feature and alongside Arnold Schwarzenegger and Sylvester Stallone in The Expendables 3. 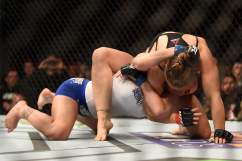