In Season 6, Nick Oleksak and his wife, Elyse, entered the Shark Tank to pitch their mini bagel balls filled with cream cheese. The couple, who met as undergrads at Columbia University, got a deal with Lori for their New York-based creations. Heavy visited Nick at his Bleecker Street store to catch up with their booming bagel business and of course, taste the little treats.

Since the show, a lot has happened. The Oleksaks had a baby, Nick quit his job and their business has gotten more exposure than they ever expected. Here is what he told us about:

“The city has responded so well to us,” Oleksak said, noting they were taking a chance by changing an iconic New York food. “We were taking one of the more prominently known things in New York foodwise- everyone comes here for bagels and pizza- and changing it completely.”

Lucky for them, New Yorkers relished in the bagel transformation and the Oleksaks have been known to provide as many as 5,000 bagel balls for a wedding. Companies like NBC also order dozens for breakfast meetings. “It’s a great office meeting food. You’re not sitting in the corner being the weird person spreading Philadelphia Cream Cheese on your bagel, trying to listen.”

The store’s location, on Bleecker Street in Manhattan’s Greenwich Village, is, according to Oleksak, almost surreal. “It’s literally like Sesame Street. We know everybody on the block. Everyone comes into each other’s stores,” he said.

Their Site Crashing During ‘Shark Tank’ & The Line the Next Day:

#tbt to almost a year ago staring our future in the eyes. Couldn't have imagined finalizing any of a deal than with @lorigreinershark Tune in Friday for the Beyond The Tank season finale and see what we've been doing over the last year! #sharktank #beyondthetank #btt #HUGEsurprise #bantambagels

The night they made their Shark Tank debut, their website actually crashed due to heavy volume. The couple was at their viewing party when they discovered the site was down. “That’s every Shark Tank entrepreneur’s complete nightmare,” he lamented. “About two minutes into our pitch, we noticed, so we grabbed our computers and ran to the corner to CVS and put hotspots on our phones.”

The next morning, customers starting lining up as early as 7:30, although the store opens at 9. This line continued throughout the afternoon and the store did 400 customers that day as opposed to their usual 150. “The Saturday after Shark Tank, we worked from 3 in the morning to 8 at night,” he said.

Talking to Lori at Least Once a Week:

The night of their site crash, they called Lori for support. “She was amazing on the night of the airing,” he said. “She said, ‘Tell me what I can do. Tell me how I can help.'”

Going into the Tank, Oleksak admitted that he wasn’t sure how “real” the whole experience would turn out to be. He was pleasantly surprised at the level of support the show gives small businesses. As for their relationship with Lori, he gushed, “It’s a relationship that we were hoping to find, but didn’t actually know if we would actually get it.”

Besides the guidance that Lori gives, Oleksak explained that he was welcomed into a network of Shark Tank entrepreneurs who all help each other:

You end up becoming part of this group of massively driven, very intelligent people who have gone down the roads you are going down or who have thought about it and decided not to and have advice to give you. We have this amazing resource of people who are an email away.

After the show, orders flooded in from all over the country, including Hawaii and Alaska. They were able to freeze the bagel balls and ship them out, so all the customer has to do is defrost and toast.

They’re in the process of pitching big-box retailers, in the hopes that one day people will be able to find them in the freezer section of their grocery store. “We want to be able to take this product to everyone,” Oleksak said.

Although production volume needed to increase after their Shark Tank appearance, their staff did not. Oleksak said this is a true testament to the quality employees they have hired. “Watching them rise to the occasion when those big orders came in and have to start baking at midnight…they’ve been amazing. I know it’s hard to find really good staff, but we’ve found it,” he said, smiling.

For another interview with a New York City business on ‘Beyond the Tank’, read: 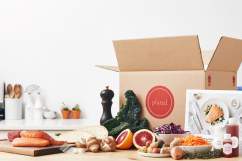 Plated on ‘Beyond the Tank’: 5 Fast Facts You Need to Know