The Critics’ Choice Television Awards 2015 airs live on Sunday, May 31, 2015 at 8:00 p.m. ET/5:00 p.m. PT. Cat Deeley, the longtime host of So You Think You Can Dance, is hosting the event and Seth MacFarlane is the recipient of the LOUIS XIII Genius Award, “who has demonstrated unprecedented excellence in the television arts.” Charlize Theron is presenting MacFarlane with the award. BTJA President Joey Berlin released a statement about what to expect with this year’s awards show, telling the Critics’ Choice Awards:

From streaming television to broadcast and cable, single-camera to multi-camera productions, inventive reality shows to high-end drama series, this year’s Critics’ Choice Television Awards contenders really span the gamut. It’s thrilling to continue to see such creativity and diversity in television programming, and as television journalists, it’s exciting to be able to share our favorites with viewers.

For all the information on how to watch the awards show online, along with the red carpet, check out the below information.

How To Watch the Show Online

In order to watch the awards show online, click here to access the A&E network live stream. This will enable you to watch all shows airing on the network live as they happen. When you come to the page, you will need to sign in with your TV provider, so click on the TV provider logo that pertains to you in order to continue. You must choose your personal TV provider (ie. FIOS, Optimum) by clicking on its designated logo. This will bring you to a Sign In page, where you must either type in your username and password or register your account. Once registered or signed in, you can access the official live stream.

How To Watch the Red Carpet Show Online

The red carpet coverage will begin at 7:00 p.m. ET/4:00 p.m. PT on the A&E Network, directly before showtime. In turn, follow the same instructions as how to watch the show online, which are listed above.

Whipclips will also be posting live videos from the event throughout the show as the action happens. Click here to check them out. 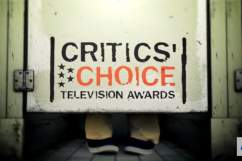 What Time & Date Is the Critics Choice TV Awards 2015? What Channel Is the Show On?