“The Sons of the Harpy” is the fourth episode in season 5 of HBO’s “Game of Thrones.” In it, the Faith Militant is introduced and Jaime and Bronn head to Dorne. In Dorne, Ellaria and the Sand Snakes vow vengeance for Oberyn Martell’s death at the hands of the Lannisters.

Read on for spoilers or click here to get caught from last week’s episode. 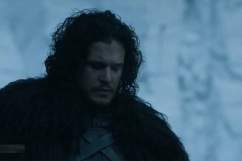 1. Tyrion and Jorah Head to Meera

The episode begins with Ser Jorah Mormont stealing a boat in Volantis after kidnapping Tyrion Lannister at a whorehouse. Later, Tyrion finds out that the queen Jorah is taking him to isn’t his sister, Cersei, but actually Daenerys in Meera. Meera is where Tyrion and Varys were heading before Jorah kidnapped, which he mockingly makes known to the disgraced knight.

2. Jaime and Bronn Land in Dorne

Jaime and Bronn pay off the ship’s captain to not let anyone know that he dropped them off in the countryside of Dorne, but the captain betrays them and alerts Ellaria to the duo’s presence.

Despite warnings from Prince Doran of Dorne, Ellaria decides to take action against the Lannisters without the royal’s knowledge. Once she finds out that Jaime and Bronn have landed in Dorne to collect Myrcella, she takes action and rouses her troops: the Sand Snakes, who are the the eight bastard daughters of Prince Oberyn Martell.

The Sand Snakes agree to wage her war with her.

After meeting with the High Sparrow in last week’s episode, Cersei sees a way to reign in the new Queen Margaery Tyrell’s influence over her son. She reinstates the position of the Faith Militant, which has not been part of the royal court since Targaryen times.

With her nudging, the Faith Militant and his sparrows wage a jihad against all sin throughout King’s Landing. Most notably they arrest Ser Loras Tyrell, Margaery’s brother, for his homosexuality.

5. The Sons of the Harpy Revolt

Lastly the episode brings us to Meera, where a revolt by the Sons of the Harpy takes the life of Grey Worm.