Kylie Jenner is the youngest of the Kardashian clan, but don’t underestimate her just because she’s a teenager. She’s often in the media for her relationship with rapper and family friend Tyga, her adventurous fashion choices, and her luscious lips. Many think that Jenner’s lips are fake, but she insists that she’s a makeup pro when it comes to her own look and she definitely has the skills to style herself. So, aside from her looks and dating life, Jenner is also a success in business with a net worth of $5 million. Read on for the details on how Kylie makes her money and what she spends her earnings on …

1. Jenner Bought a House For An Estimated $2.7 Million

In February 2015, Jenner purchased a $2.7 million five-bedroom, 5.5-bath mansion inside a gated community in Calabasas, California. She is geared up to move in to the residence when she turns 18 years old on August 10, 2015.

2. She Has Her Own Hair Extension Line

Jenner has come out with her own hair extension line called Kylie Hair Kouture by Bellami Hair. You can purchase ombre colors, regular extensions, and teal-colored mixes of clip-in extensions for $249.99 each package.

In addition to her hair extensions, Jenner has two nail lacquers from the Nicole by OPI nail polish company and the two colors are called Wear Something Spar-kylie and Rainbow in the S-kylie. 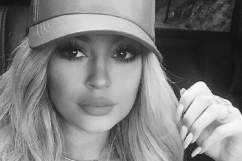 Kendall and I are excited to announce that we are working on our own mobile game! #KendallKylieGame #staytuned

Kendall and Kylie Jenner have hosted several events together in Hollywood including the 2014 Much Music Video Awards and 2014 Billboard Music Awards as well as red carpet events for Glee: The 3D Concert Movie, The Vow, and The Twilight Saga: Breaking Dawn – Part 1. In 2012, the Jenner sisters collaborated with the clothing company PacSun and created their own clothing line “Kendall & Kylie”. In 2013, the two sisters launched a jewelry line with Pascal Mouawad’s Glamhouse called Metal Haven by Kendall & Kylie jewellery collection. Then, in February 2014, Kendall and Kylie launched a shoe and handbag line for Steve Madden’s Madden Girl line. They also had a sci-fi novel called “Rebels: City of Indra”.

Kendall and Kylie are currently working on a mobile game together.

In addition to Jenner’s many business endeavors, she is also a model, just like her older sister Kendall. She modeled for the Sears clothing line “Crush Your Style” and has been featured in both OK! Magazine and Teen Vogue. Jenner has modeled for designers including Abbey Dawn and Australian swimwear designer White Sands.

5. Keeping Up With The Kardashians Provides a Nice Pay Day

KUWTK is a cash cow for both the Kardashians and the Jenners and their most recent contract for the show totaled $80 million, as reported by TMZ. According to Page Six, the show was renewed for four more seasons.