The Mexican-American singer is back on TV as captain in the music competition Me Pongo de Pie, on Univision. As captain, Pee Wee’s job is to coach the parent and its child before they go on stage and sing in front of everyone. In an interview with TV Boricua USA, Pee Wee said, “I’m really happy to come back to television with new and exciting family competition which gives the opportunity to people that dream to take their passion for music to the next level. My team will have the support to achieve success. I promise that we are going to have fun in this new show on Univision, the point is to have a great time next to our loved ones”.

Pee Wee’s real name is Irvin Salinas, according to Chron. After his mother separated from his alcoholic father, Pee Wee had to work odd jobs to help his mother, he was only 13, according to Rock Lobby.

At 15, Pee Wee met A.B. Quintanilla, brother of the late singer Selena, while he was washing his car. A.B. told him to audition for his music video and he got it!. Then, Irvin Salinas became Pee Wee because he was the minor of all the band members of the Kumbia Kings. He made his debut in 2004 with the hit single “Sabes a Chocolate.”

Pee Wee sang in the 10th year Anniversary of Selena’s death. The singer next to A.B. Quintanilla and the Kumbia Kings performed “Baila Esta Kumbia” at Selena¡VIVE!.

3.Pee Wee Debuted on a Telenovela Next to Belinda

In 2009, Pee Wee debuted as an actor in the telenovela Camaleones. He shared credits with Belinda, Alfonso Herrera, Edith Gonzalez and Sherlyn Gonzalez. “My debut in the telenovela was a great experience. Everything that we did in the telenovela, I liked…Before I started [to film] I thought that I was going to want to continue acting but now I want to do more things,” he told Noticias Vlex.

The same year, Pee Wee debuted as an actor he went solo in his music career. The artist left Kumbia All Starz and released his solo album Yo Soy. He told Chron: “The music world evolves very quickly. A trend comes in for 10 months or something, and then it’s gone. You have to always keep yourself up to date with what’s happening. Everything has to be in order. Like the message that I’m trying to send with this album, you just have to enjoy life and be positive about things. Even when negative things come into your life, you have to see them as learning experiences.”

5.Pee Wee Bought a House for Someone very Special

After he debuted as a solo artist, Pee Wee fulfilled one of his biggest dreams. He bought a house for his mother, according to People en Español. 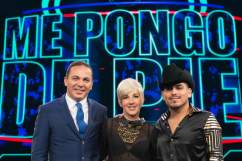