The Glee alum swoops in as Superman’s cousin and stars along with Calista Flockhart, as Cat Grant, and Mehcad Brooks, who plays photographer Jimmy “call me James” Olson.

The series will show how Kara sets out to break free from her dull life as the mercurial Grant’s lowly assistant to show her superhero skills without giving away her true identity.

“My cousin, Kal-El, was sent to Earth. You may know his story, but you don’t know mine,” says Kara in voice-over.

Up to the age of 24 she’d been content to hide her powers, but a girl can only take so much bossing around before she has to spread her wings.

In the pilot, Supergirl and Jimmy end up working together to take down the Wonder Woman bad guy, Lumberjack. You’ve been warned.

Supergirl premieres in November and will air Mondays on CBS at 8 p.m. 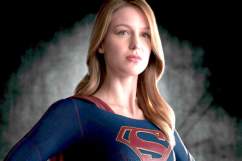 Melissa Benoist Is ‘Supergirl’: 5 Fast Facts You Need to Know