One of the more slept-on blockbusters of Summer 2015 is San Andreas.

Dwayne “The Rock” Johnson steps into the role of a rescue helicopter pilot who tries to save his daughter. She and the rest of California are in immense danger after a massive earthquake tears up their home state. This 3rd official trailer features more backstory on the main family’s conflict that arises during nature’s wrath. It also showcases more of the rescue and relief efforts that will play out, which should uplift your spirits just a bit. 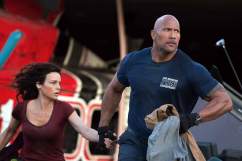