Ben Affleck, 42, and Jennifer Garner, 43, were married for 10 years before deciding to call it quits for good this week. Although it comes as a surprise to the public, a source close to the couple reported that the movie stars had been living apart for several months now, according to Fox411. Watch the video above to see and interview with Affleck during happier times about balancing his family and work.

Last year, the couple denied that their marriage was in trouble when questioned and Ben responded to the Tabloid rumors in an interview with E:

They completely lie. I mean, I can show you 10 articles of Star and OK!—those magazines feel totally comfortable absolutely fictionalizing every single element of the story. And there’s nothing you can do about that. My only hope is that people with any common sense recognize that those stories are false. And, I don’t know, there’re worse stories,”

Sadly, the rumors were true and the A-list couple’s split is bound to be messy with not just their millions involved, but their three children.

Here’s what you need to know about the Affleck-Garner family:

1. The Afflecks Were Married For Ten Years

Affleck and Garner began dating in 2004, after co-starring in Daredevil, and married a year later on June 29, 2005.

Since, Garner has taken a lot of time off to be with her family and put her career on the wayside. With the announcement of the split, Garner told US Magazine of her plans to revive her acting career.

I’ve been home for a long time. It’s my turn and I’m going to go to work this spring. I think I’ll work the spring and summer, maybe the fall too, as long as some of it’s at home. I don’t think my deals are done yet so I can’t say, but yeah, I’m about to go to work.”

A source also told Fox News that “Jen is excited to get back to work. She took a step back to focus on her marriage and family but wants to return to making more movies.” 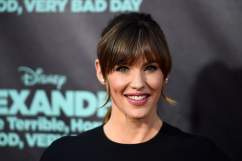 Jennifer Garner’s Net Worth: 5 Fast Facts You Need to Know

2. The Couple Will Have Shared Custody of Their Children

Affleck and Garner share a kiss during happier times. (Getty)

The ex-couple agreed to have shared custody of their three children, although paperwork has not yet been filed, according to the report by TMZ.

The couple’s combined net worth is rumored to be about $105 million, $40 million of it Garner’s and the other $75 million Affleck’s.

3. Garner Was Pregnant With Their Oldest Child, Violet Before They Were Married

Violet, 9, is their oldest child was born on December 1, 2005, just five months after Affleck and Garner tied the knot.

In March, she was spotted in Washington D.C. at a conference with Garner concerning foreign aid. Lifeandstylemag.com reported:

Most recently, the oldest of the Affleck kids was spotted in Washington with her famous parents as Ben talked to members of the state senate about the importance of foreign aid in countries like Africa. Violet was seen carrying around her little purse, hanging with her mom, and basically being all kinds of adorable.

4. Seraphina, 6, is Their Middle Child

Seraphina, their second child was born on January 6, 2008. Seraphina has often made the tabloids for running chores with Affleck and for her cute haircuts and style. She also takes ballet and karate classes and plays soccer. Watch the video above to hear Affleck talk about his children on the Jimmy Fallon Show.

The Afflecks at Hollywood & Highland Center on February 24, 2013 in Hollywood, California. (Getty)

Samuel, 3, was born on February 27, 2012. In an interview on Jimmy Fallon’s Tonight Show, Garner explained that Affleck is the ‘fun’ parent and had to explain to Samuel about his male parts.

We are divided down a very mom-dad [line]. If it has to do with making food, or homework or anything that has to do with actually functioning, that’s a mom thing. Then coming in, just as you’re getting them to bed and picking them up by their heels and swinging them around? That’s a dad thing. Anything fun, that is Ben!”

The actress added that her husband has been “psyched to finally have a little boy,” and has a special bond with their 2-year-old son, Samuel. “He LOVES his girls [daughters Violet, 8, and Seraphina, 5], but he’s serious about his son right now. So, he taught him about his bits,” she said. “He taught him about his ‘P’ and his two ‘N’s.’

Now anytime we pass a dog who’s walking on the street or we’re at a zoo or something, our poor little son is crouching down and looking up and he’s like, ‘Mama, does that have a vagina or a penis and two nuts.'” 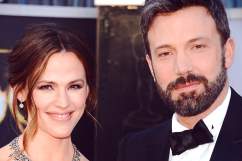