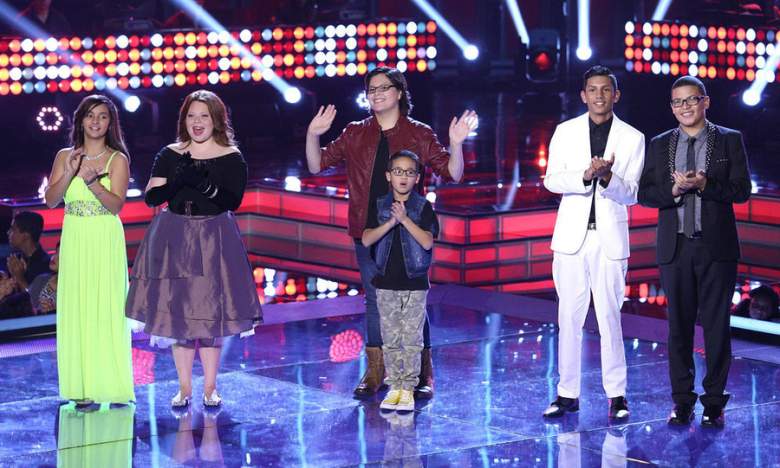 The party started with the six finalist on stage singing “Que suenen los tambores” by Víctor Manuelle. The coaches -Natalia Jimenez, Daddy Yankee, Pedro Fernandez- wore their best outfits for the finale and with a wide smile each said that they were sure their team was the winner.

Franzer Pazos, who is 14 years old, was the first one to go on stage and sing “P.Y.T” by Michael Jackson. His carisma and interpretation got him a standing ovation. By the way, Pazos can sing in Spanish, English, and Italian. When Jersen Ruiz, 14, surprised everyone when he sang the salsa song “El Cantante” by Hector Lavoe. Ruiz confessed that he wanted to sing pop music when he arrived at the show but changed his mind after experimenting with salsa. He basically will pursued a singing career in salsa. Unfortunately, he was the first to be eliminated on tonight’s show.

Alberto Castro, who is 15 years old, sang “Shut Up and Dance”. The youngest of all the finalist, Jonael Santiago, 11, sang “Treasure” by Bruno Mars. Castro was eliminated from the competition and it was filled with a lot of tears.

Shanty, Franzer, and Joanel became the three finalist and each took home $10,000.

Jonael, from Team Natalia, became the WINNER of La Voz Kids 2015. The winner of the third season received $50,000 cash prize and a recording contract from Universal Music Group for the production of a song and a music video.

The Mexican singer Lucero showed up to sing one of her hits “Quien como tu.”

Marc Anthony and Gente de Zona brought down the house with their new song “La Gozadera.”

Everyone is very excited. Here are some Tweets: