The season finale of Game of Thrones aired tonight. It is called Mother’s Mercy, a reference to one of the seven faces or aspects of god in the Faith of the Seven. In the episode, Stannis Baratheon begins to march, Daenerys Targaryen finds herself surrounded by strangers, Cersei seeks forgiveness, and Jon Snow is challenged by the Night’s Watch. A trailer for the final episode was shown last week after the end of episode 9, A Dance With Dragons. You can watch it above.

Read on for spoilers:

The episode begins with the fire witch Melisandre’s spell having worked. The snow is thawing. Stannis is able to ride to Winterfell seemingly without trouble. But a lot of his sellswords have deserted because of the fire magic burning of his daughter, Shireen. And Stannis’ wife has hung herself in melancholy. Melisandre, realizing what she’s done, then escapes from Stannis, too.

Stannis begins his march to Winterfell. Inside, the Boltons prepare for his arrival. They meet Stannis outside the castle for battle. Stannis is vastly outnumbered. His army is slaughtered, but Stannis escapes- only for Brianne to find him and kill him in revenge.

Meanwhile, Sansa picks her lock and escapes. She lights a candle in the high tower. But she is caught by Reek and Ramsay’s jealous lover, Myranda. Reek kills Myranda and helps Sansa jump to her escape.

Jon Snow is talking to Sam about the White Walkers and how Valyrian steel can kill them. Sam asks to leave Jon with Lily and the baby to become a maester. He wants to learn how to kill White Walkers. Jon grants his leave.

Later at Castle Black, Jon Snow is told that his Uncle Benjen is still alive. But it’s a trap. And Jon Snow is killed by a rebellious faction of the Night’s Watch. 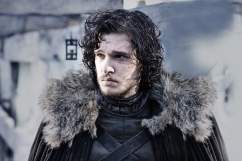 In Braavos, Ser Meryn, the sadistic pedophile who killed Arya’s sword teacher Syrio Forel, is back in the whore house beating small girls for sexual pleasure. One of the girls is Arya in disguise. She kills him.

Jaqen H’ghar, the doorkeeper of the House of Black and White, is displeased by her actions and blinds her.

In Dorne, Jaimie escorts his niece/daughter, Myrcella, and her betrothed, Trystane Martell, back to King’s Landing via ship. While in the ship, Jaimie confesses to his niece/daughter that he’s her father. But she tells him that she already knew.

Myrcella then starts bleeding from the nose and presumably dies. She has been poisoned by Ellaria Sand, who defied her king’s orders.

Back at King’s Landing, Cersei is still imprisoned. She confesses to the High Sparrow but lies. The High Sparrow tells her that she has to go on trial for all charges she denies but he will allow her to return to the Red Keep… after she is forced to cut off her hair and paraded through town naked to atone for her sins.

Once Cersei arrives at the Red Keep, a giant, demonic looking Kingsguard is presented to the naked Cersei as her new protector and avenger.

5. Daenerys Is Again With the Dothrakis

In Meereen, Tyrion, Jorah, and Daario are safe inside the palace after an attempted revolution by the Sons of the Harpies. Daenerys is still missing with Drogon the dragon. Jorah and Daario leave to find her, but Tyrion stays behind to help run the city with Grey Worm. Varys returns.

Meanwhile, Drogon and Daenerys are somewhere in the wilderness. Drogon is unresponsive to her wishes and appears injured and hungry. Daenerys goes off to find him food but is found by Dothraki tribesmen on horses.