Ian Thomson is a 2015 contestant on “The Bachelorette” and came on the show sharing a big tragedy, where he was in a bad car accident. He said that he nearly died and it gave him a new outlook on life. Thomson is a Princeton University graduate and was previously a part of their Track & Field team. You can check out his stats by clicking here. According to Reality Steve, Thomson is a Senior Associate covering the Media and Entertainment sectors for DHR International in Los Angeles. On tonight’s episode of “The Bachelorette”, Thomson reportedly leaves the show after he tells star Kaitlyn Bristowe that he thinks she’s only interested in “surface” encounters. And so, we say goodbye to Ian Thomson, but you may need to wait for the official goodbye, which will probably air on next week’s episode.

Thomson tells the cameras that he isn’t used to flying in under the radar and he also tells Nick Viall that he doesn’t feel Kaitlyn Bristowe is the right girl for her. He says that he’s tired of rejection, he doesn’t find Bristowe to be interesting and he thinks he’s better suited to be the next Bachelor rather than just a contestant. Thomson also tells the cameras that Bristowe isn’t as hot as his ex-girlfriend. Ouch. Let’s just say that Thomson doesn’t paint the best picture of himself, especially when he basically calls Bristowe shallow.

On tonight’s episode of the show, Thomson isn’t the only guy who will be leaving since there are some left-over eliminations coming from last week’s episode. Corey Stansell, Jonathan Holloway, and Ryan Beckett are eliminated. And, two other contestants end up leaving the show as well, but their departure won’t be shown until the next episode. They are Joshua Albers and Justin Reich. Additional drama occurs among the contestants when former contestant Nick Viall is welcomed to the cast by Bristowe. The men are clearly upset by the new competition on the show and feel it’s unfair. They also begin to doubt their connections with Bristowe since she decided to bring Viall into the mix.

For more information on The Bachelorette 2015 season: 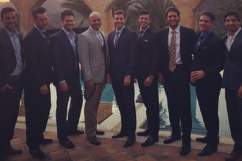