Jamie Sangouthai, 37, was the best friend of Khloe Kardashian’s ex Lamar Odom. We’ve seen him often on the Kardashian spin-off show Khloe & Lamar, but unfortunately over the weekend, Sangouthai suddenly passed away. For more information on Jamie Sangouthai and his untimely death, read on.

1. He Died Of a Drug Overdose

According to Radar Online, Jamie Sangouthai is reported by a source to have died of a heroine overdose. In addition, a source tells Us Weekly that his best friend Lamar Odom is truly heartbroken. The source stated:

Lamar is beside himself. This is the worst tragedy. This is so sad. They were best friends, like brothers. Lamar is going to take this really hard.

Sangouthai was pronounced dead Sunday at a Los Angeles hospital.

Life doesn't get easier but I promise you that life will make you stronger. ? https://t.co/6HTruujyv3

Upon hearing the news of Sangouthai’s death, Khloe Kardashian posted a series of heartbroken tweets, as did her BFF Malika Haqq.

Thru good and bad times life shows us every spirit matters and leaves a print on the hearts of others… https://t.co/MJtpmfDmga

On Khloe & Lamar’s reality show, we saw that Jamie Sangouthai lived in a loft next door to the couple and his relationship with Odom sometimes caused issues between Khloe and Lamar. One big problem was that Lamar Odom often paid for his friends and those close to him.

3. Jamie Sangouthai Was a Part of the “Rap Video” Where Lamar Odom Admitted to Cheating On Khloe Kardashian

In 2013, a video of Lamar Odom and Jamie Sangouthai rapping was published online by TMZ and it showed Lamar Odom rapping about cheating on then wife Khloe Kardashian when she’s out of town. On Keeping Up With The Kardashians, we heard Khloe’s BFF Malika Haqq on the phone with Khloe’s sister Kim, talking about how disrespectful the video was. She also said how devastated Khloe was. This clearly wasn’t Lamar and Jamie’s best moment together.

Sangouthai was one of Lamar Odom’s groomsmen at his wedding to Khloe Kardashian.

4. Sangouthai Was a Big Supporter of Odom’s Career

The above video clip is a shot of Sangouthai outside nightspot Bootsy Bellows in 2014 and he is shown talking up his best friend Odom over his career in basketball. Sangouthai said that any team would be crazy not to want pick up Odom.

Sangouthai has been good friends with Odom since high school and they both shared the same passion for basketball, according to E! News.

Lamar Odom has a clothing brand called Rich Soil and Sangouthai used to work for the company. 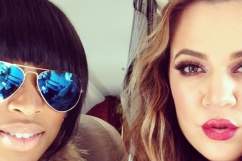