A video of a shirtless Shia LaBeouf freestyling in a rap circle has the wild-haired movie star spitting rhymes about being Jewish and starring in <emTransformers. The video was appears to have been shot on a smartphone and was shared on YouTube by Corey James, but as to where the rap battle took place, no information is given.

LaBeouf most recently made headlines after a head injury last week.

TMZ reported that while shooting his latest movie American Honey in Williston, North Dakota, LaBeouf had to get 20 stitches and 13 staples after an onset injury. 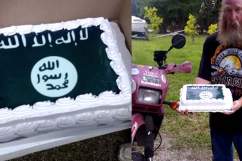