The lead singer of Smash Mouth has appeared in a viral video where he screams at a crowd for throwing bread at the band. The vocalist, Steve Harwell, was recorded just prior to his band beginning their set at the Taste of Fort Collins festival in Colorado. The 1990s hit makers were billed as the headliners for the fest, which is described as a “family-friendly celebration perfect for Northern Coloradans’ active lifestyle.”

As the band began their show with the 1990s hit “All Star,” the crowd began throwing bread, reports USA Today. The paper says that free bread was being openly handed out by festival vendors. The chords to “All Star” can be heard as Harwell says “You thrown one more piece of shit on the f**king stage. I’m gonna come find your ass, I’m gonna beat your ass, whoever the f**k you are out there, OK?” He then goes into the crowd to look for “pussy bitches.” Eventually, he gets stopped by security and the show goes on.

Tragically, in June 2001, Harwell’s six-month-old son, Presley, died after a battle with acute lymphatic leukemia. He told USA Today about it in 2002 saying “Presley was totally healthy. We thought he was teething. I noticed his stomach was swollen and hard. I usually tickled him and he’d crack up, but he started crying a little bit and he had a glassy look in his eyes.” After Harwell’s wife, Michelle, took their son to a local hospital, they learned of his condition. Little Presley died shortly after. As a result, the Harwells set up the The Presley Scott Research Foundation for Leukemia. The disease accounts for one-third of all cancers in those under the age of 15.

3. He Began His Career as a Rapper

Smash Mouth began in 1994 while Harwell was the lead singer of a rap group called Freedom of Speech in San Jose. Eventually, Harwell told his manager that he wanted to start a rock band. That band’s manager, Kevin Coleman, knew rock guitarist Greg Camp and bass player Paul De Lisle.

Coleman put the trio in contact and Smash Mouth was born. After getting a demo played on local radio, they were signed by Interscope Records. The group’s first single, “Walkin’ on the Sun,” went double platinum. Smash Mouth’s apex came in the late 1990s with their hits “All Star” and a cover of “Why Can’t We Be Friends?”

4. Harwell Described His Audiences as ‘4-Year-Olds Up to F**king 50-Year-Olds’

Less than a month before his tirade, Harwell told VICE in an interview that he enthused because his crowds range from “four-year-olds up to f*cking 50-year-olds.” He adds that the band love doing college shows because students grew up on the band’s music. Harwell claimed that “I get people walking up to me going, “Hey, you guys sound just like your records” and I’m like, “That’s what I want to hear.” That’s the coolest compliment you can give me.”

You can watch a video of Harwell eating 24 eggs for charity alongside professional chef and bro Guy Fieri, who prepared the eggs in 2012. The eating of the eggs came from a challenge by Something Awful. A writer on the site, Jon Hendren, offered Harwell $20 to eat the eggs and so the singer could gain more exposure for the band. In the spirit of goodness, Harwell only agreed to do it if the band’s fans could raise $10,000 to donate to St. Jude’s Children’s Hospital for cancer research. 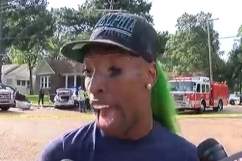