This is when it all started, and dang it was a wild ride. I have nothing but respect for Kaitlyn as a person and her desire to take this process seriously.

Is Bachelorette contestant Ben Higgins the next star for The Bachelor 2016? The new Bachelor is … Ben Higgins. Yes. According to Reality Steve, Ben Higgins has not signed off on the deal, but he is reported to be The Bachelor. Often, the third runner-up of the season is chosen as the next star and Higgins falls right in that category. Plus, fans love him and he’s adorable.

If for some reason Higgins decides not to go through with the opportunity, there are plenty of guys who are down to be The Bachelor. Ian Thomson stated on the show that he’d be the perfect candidate and recent heartbroken cast-off Jared Haibon told E! News he’d jump at the chance, explaining:

Who doesn’t want to be the Bachelor? It would be a great experience. If they asked me, I would definitely consider it. It’s something that I want to think about and talk about with my family.

Another contestant who would be a great choice is fan-favorite Ben Zorn. He’s hunky, strong, handsome, and a sweet guy. What more could a girl want? 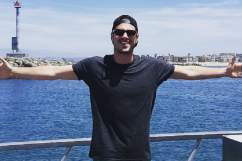