Bobbi Kristina Brown passed away on Sunday at the age of 22, about seven months after she was found unresponsive in a bathtub at her suburban Atlanta home.

Details of the funeral service for Bobbi Kristina, the only child of the late Whitney Houston and Bobby Brown, have not yet been announced. According to Showbiz411.com, her funeral will be held in Atlanta and she will be buried later this week with her mother in New Jersey.

Bobbi Kristina had been in a hospice facility in the Atlanta area since late June. She was found in the bathtub on January 31, and never regained consciousness. She spent several months in an Atlanta hospital.

An apparently fake video purporting to show a private funeral for Bobbi Kristina held at the hospice care center was posted online last week, causing outrage among her family, friends and fans. The 15-seconds-long video was posted to YouTube, but has since been deleted. The video was titled “Bobbi Kristina Brown Funeral Service 7/30/2015,” and may have been footage from Sage Stallone’s 2012 funeral, according to the Mirror.

Read more about Bobbi Kristina’s life and death at the link below: 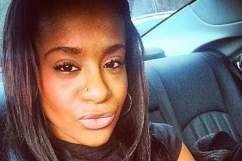