Just a month after getting married TV chef Donal Skehan is reappearing on US TV screens. The Irish star is featured on the July 23 edition of the Today Show cooking up his usual storm. This is all comes less than a month after he got hitched to his long-time girlfriend, Sofie Larsson, in his native Ireland.

Donal, 29, and Sofie got married in rural Ireland on June 27. The wedding was a glitzy affair in Ireland, among the guests were UFC star Cathal Pendred. The nuptials took place in Lisnavagh House in Carlow. The couple celebrated their wedding along with their beloved dog, Max.

Sofia is a Swedish native who met Donal in 2006 while she was vacationing in Ireland. Sofie is a key part of Donal’s team, helping him to book events and running the financial side of their burgeoning empire. He proposed in May 2014. The announcement of their nuptials made the front page of the Irish Examiner.

2. Donal Once Lost a TV Talent Show to a Puppet Turkey

In 2008, Donal entered the Eurosong competition. It’s a televised talent show, similar to American Idol, but all done on one night. The winner gets to represent Ireland at the Eurovision Song Contest, a singing talent show for all countries in Europe. Donal performed the song “Double Cross My Heart” at the event and made it to the final five. He lost the public vote, however, to a talking turkey puppet known as “Dustin” in Ireland. This turkey once ran for president of Ireland and won a notable portion of the vote. Donal told Heavy.com, “It was my dream to perform at Eurovision, but it wasn’t to be, the whole experience prepared me for life in the public eye.”

3. He Performed as the Opening Act for the Pussycat Dolls in 2009

Following his Eurovision disappointment, Donal was tapped to become a member of pop group Industry. Joining Donal in the band were Lee Hutton, Michele McGrath and Morgan Deane, who later married South African cricket captain Graeme Smith. The group had two No. 1 hits in 2009 with “My Baby’s Waiting,” which you can watch above, and “Burn.” During that summer, the band opened for The Pussycats Dolls during a show in Ireland. The band folded in 2010, with too much creative friction in the band. Previous to that, Donal was in a short-lived boy band called Streetwize. That band never really got off the ground but were represented in America by disgraced boy band entrepreneur Lou Pearlman.

4. Food Is in the Skehan Family Blood

Throughout his ill-fated music career, Donal maintained his love of cooking, through his blog, Good Mood Food. The love of food was passed down through the Skehan family, he tells Heavy.com: “My mom is just the best cook you’ll ever meet.” His parents run a successful fruit and vegetable import company in Ireland, supplying some of the country’s top restaurants. Donal’s dad still maintains his 5 a.m. starts to keep the business running.

Along with fellow celebrity chefs, Catherine Fulvio and Neven Maguire, Donal is part of a new wave of Irish food. According to the editor of magazine Food & Wine in Ireland, the idea that Irish food is all potatoes, corned beef and cabbage is “now history.” With the Irish economy slowly recovering from the 2008 crash, the Irish Times reported in January 2015 that food and drink exports were worth $10.5 billion in 2014. 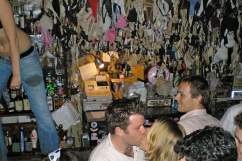 Hogs & Heifers Is Closing: 5 Fast Facts You Need to Know