Mario Lopez and his family are the latest squad set to crash the set of Celebrity Family Feud, scheduled to face off against Joey Lawrence and his family on the summer hit on Sunday night. Lopez, who is still best known for his role as AC Slater on Saved by the Bell, will be joined by his wife, Courtney, mom Elvia, sister-in-law Gina and brother-in-law Damian on the show, hosted by Steve Harvey.

Here’s what you need to know about the Lopez family:

1. Lopez Is the Host of ‘Extra’ & His Own Syndicated Radio Show

After a successful acting career that was, of course, highlighted by a long-time stint on Saved by the Bell, Lopez turned his attention to hosting. He hosted the X-Factor and was the co-host of Pet Star on Animal Planet before landing at Extra full-time after first joining the program as the weekend host in January 2007.

Lopez also hosts his own daily syndicated radio program, “On With Mario Lopez” which streams online on iHeart Radio and airs on select CHR and Hot AC stations throughout the United States.

2. Lopez & Courtney Mazza Have Been Married Since 2012

Lopez and Courtney Mazza, who met while they were both starring in the Broadway revival of A Chorus Line, were engaged in 2012 after a New Year’s vacation in Mexico. Lopez told US Weekly:

We took a walk alone as the sun was setting. I told Courtney that I wanted the mother of my children to have their last name. She was silent at first from shock, then she leaped for joy and did a little jete!

The couple had been dating for four years prior to their engagement and officially tied the knot in December 2012 during a seaside ceremony in Punta Mita, Mexico. The lavish affair was held on the estate of Girls Gone Wild creator Joe Francis and featured a cake by Cake Boss star Buddy Valastro. The wedding was also documented in a two-hour TLC special, Mario & Courtney’s Wedding Fiesta.

3. Mazza Was a Broadway Dancer

Before she met her future husband on the Great White Way, Mazza had an impressive Broadway resume to her name, with performances in Cry-Baby and The Little Mermaid.

Mazza began her career in local theater and the Pittsburgh native was part of the Pittsburgh CLO Mini-Stars, a children’s performing group for nearly a decade. She graduated by Pittsburgh High School for the Creative and Performing Arts before moving to New York City and landing a role in Britney Spear’s “Me Against the Music” video. She has also appeared on TV several times recently, including the series Mario Lopez: Saved By The Baby. 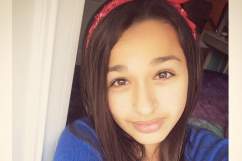 4. The Couple Have Two Children Together

We are so overjoyed. What an amazing, wonderful and overwhelming experience to welcome our daughter into the world.

The Lopez family got a little bit bigger in 2013 with the birth of son Dominic. The baby was reportedly named after Courtney’s grandfather and goes by the nickname Nico. Lopez announced his son’s arrival on Twitter:

5. Lopez’s Mother Worked as a Telephone Clerk When He Was Born

Lopez was born in San Diego, California in 1973 to mom Elvia and Mario Sr. While he was growing up, Lopez’s mother worked as a telephone clerk in the city, helping to support both his successful acting and athletic careers.

Throughout high school, Lopez was a dominant athlete, wrestling for Chula Vista High School. In 1991 he placed second in the section and seventh in the state. He told People Magzine he wanted “to go to the Olympics” in 1992.