The two have had a tumultuous relationship since the passing of Bobbi Kristina’s mother, Whitney Houston, on February 11, 2012. Bobbi Kristina had accused Pat of gold-digging in a public campaign that included Twitter. Bobbi Kristina’s “husband” Nick Gordon also took up the cause in slandering Pat, so much so that Pat eventually filed a restraining order against him.

Bobbi Kristina had been in a medically-induced coma for two weeks after she was discovered unresponsive in a bathtub by Gordon on January 30.

It had been reported that she was to be taken off life support on February 11, 2015, three years to the date of the death of her mother, but this proved untrue.

Gary is an ex-NBA basketball player for the Denver Nuggets and later became a backup singer for Whitney. Him and his wife, Pat, have one daughter named “Raya Garland.”

Pat is currently the President of the Whitney Houston Estate and has been involved with events and rights to Whitney Houston’s life following her death. She is also the executor of the trust fund Whitney had set up for her daughter. Her bad relationship with Bobbi Kristina has been the focus of media attention.

Bobbi Kristina was not happy that her aunt had control of Whitney’s estate.

2. The Problems are Bad With Bobbi Kristina’s ‘Husband’ Nick Gordon

Despite calling him her husband, Bobbi Kristina and boyfriend Nick Gordon never married.

Gordon is not highly thought of in the Houston family outside Bobbi Kristina and issues took a legal turn last March when Pat filed a restraining order against him.

In March 2014, Marion “Pat” Houston, 54 – whose husband is Whitney’s brother Gary and who serves as the executor of the trust fund Whitney set up for her daughter – petitioned for a temporary protective order against Gordon.

In court documents filed in Fulton County, Georgia, and obtained by PEOPLE, Houston said Gordon had “made threatening comments and posted photos of guns with the intention of making petitioner fearful for her personal safety. Respondent then posted more photos of guns later and has sent harassing texts.”

Following the filing of the restraining order, Bobbi Kristina took to Twitter to deprecate her aunt publically.

She alleges that Pat has been spending exorbitant amounts of money and living a lavish lifestyle on the Whitey Houston Estate’s dime. Allegations by Bobbi Kristina also allege that Pat has sold things like Whitney Houston’s coffin picture to the highest bidder, but such claims were never proven.

4. Bobbi Kristina Claimed That the Family Controlled the Estate Because They Alleged her to be ‘Unstable’

Another reason Bobbi Kristina rallied against Pat is because she thought Pat put forward the information that she was “unstable.”

Bobbi Kristina saw things from a different perspective. Barak insists her issue was with the family. She allegedly accused her family of trying to remain in control of her mother’s estate based on claims that she was “unstable.”

“My family say I’m crazy so they can get hold of my money,” Bobbi Kristina allegedly said.

Pat won’t inherit the estate. But her husband Gary will get a cut.

According to the terms of the will, if Bobbi Kristina dies, family matriarch Cissy Houston and Whitney’s two surviving brothers are next in line to inherit the estate — which includes full royalties from the late singer’s music, likeness and image.

Bobbi Kristina inherited 10 percent (about $2 million) when she turned 21 and was scheduled to inherit another 15 percent at age 25, before receiving the remainder at 30. 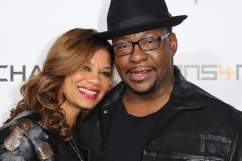