The long-time married couple, who hail from San Diego, California, joined Storage Wars as featured buyers in season four and have already started making a name for themselves on the auction, and reality TV, circuit.

The two will be featured heavily this season, the show’s eighth, as they battle the other main buyers on Storage Wars, looking to find that one, fantastic, money-making find. Here’s what you need to know about the couple and their work:

Although Rene’s most obvious trait may be his thick German accent, which seems to almost always overpower other bidders on Storage Wars, he actually graduated stateside, earning his high school degree from Las Vegas High School in 1996.

Rene has been buying and selling antiques and collectibles since he was just 11 years old ad claims that his mind is “like an encyclopedia of second-hand prices.”

2. The Couple Own & Operate a San Diego Thrift Store

Rene and Casey live in San Diego where they own and operate a 7,000-square foot store called Bargain Hunter Thrift Store. The store boasts a large stock of collectibles and antiques, some of which were even found on Storage Wars, as well as an online store that allows buyers to search for goods from all over the country.

@mccord_tim Our store is in #SanDiego in a suburb Poway. We love when #StorageWars fan stop in & say Hi!! :) pic.twitter.com/u0ZaarKU4s

Since the pair have appeared on Storage Wars, the store has become a bit of a tourist attraction, with fans stopping by to shop and maybe even grab a photo.

3. The Pair Had Been Courted By ‘Storage Wars’ Since the First Season

The production company behind Storage Wars had been trying to get Rene and Casey to appear on the show since its very first episode in 2010. However, running your own business can be time consuming and the couple was never able to sync up their schedules with the show’s production.

Things finally started to work out during the fourth season and the pair appeared as featured buyers in six episodes that year. They came on-board full-time in season five and quickly established a reputation. Rene explained his mindset when he joined the show, saying:

It’s good to be married and be part of that team and there’s love but at the same time, I don’t take BS from anybody. If you try to push me or punk me, I’m not going to take it. That’s my nature. 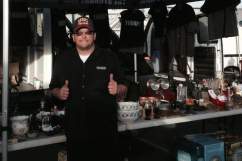 4. Rene Has Butted Heads With Darrel Sheets on the Show

As with most reality TV shows, Storage Wars is no stranger to on-screen drama and has even had its own share of off-screen moments as well. Rene has frequently butted heads with original buyer Darrel Sheets since he joined the show full-time in the fifth season.

Rene took to Facebook in 2013 to clear up some of the drama, writing:

5. The Couple Has Publicly Discussed Their Strong Faith

The couple has frequently discussed their faith and Casey has taken to social media more than once to share her beliefs with her followers. Both Rene and Casey attend church regularly and their daughter accompanies them to services.