Thaddius Robinson’s episode of MTV’s Catfish for season 4 is unlike most of the episodes we see. Read on for the details on Thad and his mission to stop a true “catfish.”

1. Thad Robinson Is A Corrections Officer

Thad is a corrections officer and he did a little detective work to find out who “Sara” really was … Thad is from Texas and hopes to find out more about his catfish in order to prevent others from being duped by her. Catfish hosts Nev and Max end up talking to another victim of “Sara” who went through exactly what Thad did.

2. When He Began Talking To “Sara”, Thad Was Still Married

When Thad started talking to “Sara Jackson” online, he was actually married. For two years, Thad battled his doubts about his marriage before he started talking to people online. With the advice from “Sara”, Thad decided to tell his wife since they had a child together. After a few months, he and his wife took some time apart, but they have been working on their relationship.

3. The Photos of Sara Jackson Are Really Sara Peccia’s Pics

It's going down for real. pic.twitter.com/aAa6nDycuk

Sara Jackson is, of course, not who she says she is. She is actually using the photos of a girl named Sara Peccia, who lives in Sacramento, California. Thad did some research and was able to contact Peccia to warn her about the improper use of her online pics. News OK reports:

Although her situation is just now gaining national attention, Peccia said she’s been dealing with it for nearly a decade. About nine years ago, a woman found photos of Peccia on the social media site MySpace and began using them to set up fake social media accounts, Peccia said. The woman would use those accounts to build romantic relationships with men, Peccia said. Sometimes she would manipulate them into sending her money. Peccia didn’t find out about it until she started getting messages from people online, asking for information about her.

Peccia said she’s always left “picking up the pieces” from these scams and first noticed something was wrong in 2010. She has since made her profiles private, but still receives messages from strangers and found out her photos were even used on a fetish website.

After Thad did some digging, he discovered that “Sara” was actually a woman named Ashley Pietrowicz. Sara Peccia and Thad both confront Ashley, who promises to stop using Peccia’s photos. However, members of Ashley’s family have since contacted Peccia to let her know that Ashley hadn’t stopped.

Since taping the show, Ashley was arrested was arrested for possession of drug paraphernalia when the police found her in a parking lot with a bag of black tar heroin. 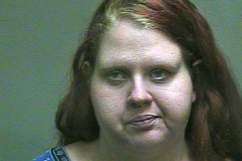 5. Sara’s Far-Fetched Stories Are What Tipped Off Thad