Tonight is the 2015 finale of The Bachelorette and we’ve got a full live recap going on right here. Check out all the spoilers and run-down of tonight’s episode below, including the winner! 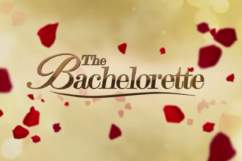 ‘The Bachelorette’ 2015 Finale Live Stream: How To Watch the Show Online

The episode starts off with Nick Viall and Shawn Booth each packing their bags and reflecting on their relationships with Kaitlyn Bristowe, but they’re also each wondering about her relationship with “the other guy”. The show then cuts to Malibu, back where it all began. We see Kaitlyn greeting her family, who are eagerly waiting to meet the guys. They are also trying to wrap their heads around Kaitlyn falling in love with both men. Kaitlyn also told her family that Nick and Shawn hate each other and asked that they get rid of their judgments about Nick from Andi Dorfman’s season. 8:08 p.m.

She's in love, but is it enough for a proposal? #TheBacheloretteFinale pic.twitter.com/1vdv7q2SKZ

Kaitlyn takes her mother aside and lets her know that she had sex with Nick. Her mother Leslie was concerned, but was happy that Kaitlyn was at least honest about what happened. 8:09 p.m.

The first of Kaitlyn’s suitors to meet her family is Nick Viall. Kaitlyn lets him know that she told her family about them having sex, which makes him very nervous. He brings her family wine and flowers and they all sit down to jokingly grill him. Some of Kaitlyn’s family members have reservations about Nick’s intentions and say she doesn’t picture Kaitlyn with a guy like him. Nick lets them know that when he was on Andi Dorfman’s season, he went on the show for an experience, but with this season, he went on the show specifically for Kaitlyn. 8:12 p.m.

Kaitlyn’s mother Leslie sits down with Nick to get to know him a little better. She tells him that she’s shocked to see him and says that she thought he was possessive, jealous and arrogant on Dorfman’s season. Nick tells her that he only came on the show to be with Kaitlyn because they talked before the show began. Leslie then wanted to know what her daughter sees in him and she also asks Nick about the attraction they have for each other. Nick tells her that it’s hard for him to get enough of her and that he’s in love with Kaitlyn. When Nick becomes emotional, Kaitlyn’s mother softens and says she’d be happy to have him in their family. 8:19 p.m.

Nick asks Kaitlyn’s father Mike for permission to marry his daughter and her father tells him he gets a good feeling from Nick. He tells Nick that he does have his blessing to marry Kaitlyn. 8:20 p.m.

When Kaitlyn’s family sees Shawn Booth, they are instantly drawn to him. Then, Kaitlyn’s mother sits down and asks him how he felt about Kaitlyn having sex with Nick. He does let her know he was jealous, but assures her that it’s only because his feelings for her are so real. Leslie thought the conversation went well and said Shawn’s answers were very mature and confident. 8:33 p.m.

Kaitlyn’s sister lets her know that she is “Team Shawn” because she loves the way Kaitlyn acts around Shawn, saying their connection is different than hers with Nick. In the meantime, Shawn sits down with Kaitlyn’s dad and tells him about his feelings, saying he’s excited to settle down with Kaitlyn. He then tells Kaitlyn’s dad that he wants to include Kaitlyn’s mother in the conversation. So, Shawn brings Leslie over and asks both of them for permission to marry their daughter. Both of them give him their blessings. 8:36 p.m.

Next, Kaitlyn goes on one more date with each guy, starting with Nick. The two hang out on a boat together, drinking champagne, and celebrating their relationship. 8:42 p.m.

Nick opens up to Kaitlyn and tells her he looks forward to being with her in real life, after the show is over. Kaitlyn tells the camera that she has a different relationship with Nick than she has had in the past. She says Nick brings out a side of her that no one else does. She also talks about the amazing connection she has with Nick. 8:46 p.m.

Later on, Nick and Kaitlyn get together for the evening part of their date and, again, reminisce about their times together. Nonetheless, Kaitlyn is still torn between him and Shawn. Nick then gives Kaitlyn a photo of their first date together in a frame, next to a poem about the way he felt about her on their first solo date. Kaitlyn admits to the cameras that she can picture Nick as her husband. The two then makeout on the bed in Nick’s room of course. 8:56 p.m.

On a side note: Don’t forget that Bachelor In Paradise 2 starts this Sunday. Check out all the best info in the below link:

Next, Kaitlyn meets up with Shawn for their final date. The two also reminisce about their relationship and Shawn worries about what the future holds, if Kaitlyn will choose him or not. Their conversations don’t seem to flow as well as Kaitlyn’s with Nick and things take a serious turn as Shawn and Kaitlyn are both very nervous about what’s ahead of them. Kaitlyn apologizes for being awkward and Shawn opens up about his concerns. Because of Kaitlyn’s strange behavior, Shawn begins to have his doubts about her feelings and tells the cameras that he’s not proposing to her if the vibe doesn’t change. 9:05 p.m.

This is feeling pretty awkward. #TheBacheloretteFinale

For their night date, the two get together for a casual night in together. Shawn tells Kaitlyn he wants to have a good night with her and Kaitlyn admits the awkwardness earlier was her fault. 9:12 p.m.

Shawn presents Kaitlyn with a memory jar that is filled with mementos from all of their dates together, photos, and souvenirs. The date goes very well and Shawn is confident that he’s going to propose to Kaitlyn. 9:18 p.m.

This isn't going to be easy. #TheBacheloretteFinale pic.twitter.com/40JsWpvUuz

Each of the guys sits down with Neil Lane and picks the engagement rings they are going to propose to Kaitlyn with. Nick Viall thinks about last season when Andi Dorfman surprised him at his door with bad news, sending him home. In the meantime, Kaitlyn is very nervous, having to choose between two men that she loves. The guys head over to meet Kaitlyn in their limousines and are both excited and dreading seeing her. They are scared that their hearts are about to be broken. 9:32 p.m. 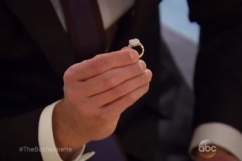 Nick is the first to arrive at the mansion to propose to Kaitlyn, but she can’t even let him finish because she feels so bad that she has to reject him. Nick becomes frustrated, hurt and angry about her rejection, feeling their entire relationship was a joke. When he leaves the mansion, he tosses the engagement ring across the limo. He then takes off the ring they bought together in Ireland and throws that as well. Can you really blame him? 9:48 p.m. 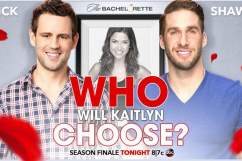 Kaitlyn feels horrible about rejecting Nick, but she says she knows it’s going to be worth it when she sees Shawn. Shawn pours his heart out to Kaitlyn, and though she fakes him out for a second, she lets him know that she is completely his and that she is in love with him. 10:00 p.m.