…You will be my smoochie woochie! If you will meet me in St Louie, Louieeee… #stl #hometown #goodvibes

Allison Jayne Raski is the second ex-wife of Jim Edmonds. We’ve heard her name several times on Real Housewives of Orange County. Read on for the facts on Allison below.

Having a cup of coffee in the morning while the kids ride their scooters. Not a bad view. I guess I should turn around.

Jim Edmonds and Allison were married in a casual ceremony at the St. Louis County Courthouse in 2008. According to the MLB website, Jim wore a T-shirt, jeans and sneakers. The reception took place at Jim’s steakhouse in Clayton. Allison was 28, while Jim was 38 years old.

The couple was married for six years.

2. Allison and Jim Edmonds’ Children Live With Her In St. Louis

Family day @disneyland today. Holy tired legs at the end of the night. Love my wife @meghankedmonds for putting up with the craziness. #summertime #overcrowdedbed

A problem that Jim Edmonds and his current wife have is that he travels back and forth from St. Louis and Los Angeles. He does this for work as well as to see his two children, who he has with Allison. They live with her in St. Louis.

Lucky enough to be standing on the stage with my beautiful wife @meghankedmonds for Blake. #stagecoach #blessed

Meghan King Edmonds is one of the stars of the Real Housewives of Orange County and she’s also the third (current) wife of Jim Edmonds. She tries very hard to be a good stepmother and she had a good relationship with Jim’s first wife. However, she reveals that she has no relationship with Jim’s second wife, stating that they have issues. Meghan actually insisted on getting rid of the home that Jim and Allison shared together and sell of all their belongings as well. She wanted a clean slate with their own things, nothing that Jim shared with another woman. 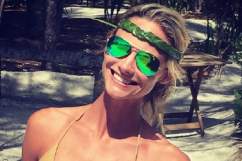 Early this morning I lost the most important person in my life. I'm so blessed to have had these past 17 years with you. But that will never be enough for me. I can't imagine my life without you and I never imagined this day would come. You were an inspiration to everyone who knew you and I will aspire to be everything you were. You truly lived life to the fullest and were such a fighter. The memories we made will forever be instilled in me and I'll never forget the good times we had. You were not only my mom, but my best friend. Thank you for everything you've taught me and for the wisdom you've given me. I will never ever stop loving you. Life won't be easy without you but I know you will be with me every step of the way. Rest in peace mommy, I love you with all my heart❤︎❤︎❤︎❤︎

LeAnn is Jim Edmonds’ first wife and she made a few appearances on Real Housewives. She and Meghan had a friendly relationship as LeAnn was battling cancer. She is the mother of Jim’s two daughters Lauren and Hayley, who we see on the show as well. Recently, LeAnn sadly lost her battle with cancer.

Just watched the new #RHOC that airs this Monday, it's HILARIOUS! This pic is from the first dinner , Champs in rose gold cages ! #FREETHECHAMPS

RHOC cast-mate Heather Dubrow, who is good friends with Meghan King Edmonds, was friends with Allison prior to Jim’s meeting Meghan. While some of the other cast members feel it’s “girl code” to not befriend the new wife, but Heather states that there’s no rule book when people get divorced. It’s a sticky situation.

Some speculate that Jim’s relationship with Meghan overlapped with his marriage to Allison. Allison and Jim were reportedly married for 6 years, which means they divorced in 2014. Jim and Meghan got married this year, but Meghan tells the RHOC women she’s been in Jim’s life for two years. What do you think?