World-famous DJ Calvin Harris and Taylor Swift are the hot couple right now. With Calvin Harris standing at 6’6″, he’s the perfect height for Swift, who stands at 5’10” tall, making them a model couple. Read on for the latest news on their dating and why the two may end up married.

1. Taylor Swift Is All Ready Writing Songs About Harris

Taylor Swift is known for putting her relationship into her music, usually her failed relationships. Harry Styles, Jake Gyllenhaal and John Mayer have all been reported as subjects of her material. An insider tells Hollywood Life that Swift is already writing love songs about her beau Harris, stating that:

She’s got all these ideas for happy love songs now because of him. Even though she hates saying goodbye, spending time apart is making it really exciting. When they do see each other the tension is so built up, it’s total fireworks and she’s putting that passion into her new songs.

Scott Eastwood is the gorgeous son of Clint and he is known for his role in the movie “The Longest Ride”. He is also the love interest of Swift in her new music video “Wildest Dreams”. So, do you think this made Swift’s man Calvin Harris jealous? An insider tells Hollywood Life:

Calvin isn’t the jealous type. He trusts Taylor 100%. He actually gave her the thumbs up with her casting choice in ‘Wildest Dreams.’ Calvin wasn’t on the set, but he did meet Scott with Taylor and thinks he’s cool.

That’s a strong and confident man.

3. A Source Has Stated That Swift Would Love to Marry Harris

Like any couple that’s crazy about each other, the two have reportedly talked about “forever.” A source reports:

Taylor would love to marry Calvin she already talked about how she would take his name for her personal life but she’ll always stay ‘Taylor Swift.’ Taylor doesn’t think it’s a sure thing, she’s not that cocky, but she has a really good feeling that they will end up together. Even though they haven’t been together that long if he did ask her tomorrow she’d say yes, she’s just so happy with him.

4. Swift Recently Mouthed the Words “I Love You” to Harris At Her Concert

Swift has had great success on her 1989 tour with killer concerts, bringing tons of big stars on stage with her. Recently, she was caught mouthing the words “I Love You” to her beau Harris in the audience. Check out the video above.

When Zayn Malik appeared to diss Taylor Swift in a tweet online, Harris engaged in a bit of a Twitter fight to defend his girl. It’s no wonder since he tells KIIS FM that he is insanely smitten with his girl, explaining that:

It’s interesting because obviously there’s different things written about it every day and even if we don’t do anything publicly for a while, someone will make something up. For me it could be a lot worse, and I’d still be, like, insanely happy with her so I’m good with it.

What was most interesting about Harris and Malik’s Twitter fight was that Malik’s former best bud and band-mate Louis Tomlinson favorited one of Harris’ replies. I guess we can see whose side he’s on. 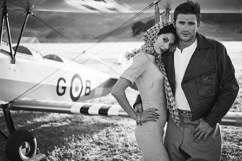