Tonight is the finale of Pretty Little Liars and we finally find out who “A” is. Read on for our live recap of the big reveal.

The show picks up with Alison and the other liars chasing a black-hooded person to the roof, who is standing on the edge ready to jump. The police watch from below and the liars tell Charles that they’ve heard his story and the understand as Charles appears to jump. The show then cuts to earlier that night as Hanna, Emily, Spencer and Aria try to find Alison. The mothers are still locked in the basement as the liars struggle to find Alison with the help of Sara. Aria realizes that they aren’t alone and then a doorway opens. Someone in a red cape and mask confronts them and it turns out to be Mona. She says she knew that Clark was an undercover cop. The girls try to find out where A’s server is coming from and they think A is Rhys. We later see Jason being dragged down what appears to be a hallway. Alison wakes up in what looks like a psychiatric hospital room and she sees her father lying on the floor outside the room. He appears dead as he lays with his eyes open. The girls break in to the Carissimi Group and realize Charles’ birthday is September 7th. They then walk into some sort of digital control room. Sara says she’s going to wait in the hallway as the door shuts behind the girls and locks them inside. Is Sara a bad guy? The girls are then shown a live feed inside Alison’s room.

Suddenly, the black hooded figure turns around and it is CeCe Drake.

We then learn how Charles (CeCe) became A. Alison was like Charles’ own little baby and CeCe explains that she never meant to ever hurt Alison. The accident with the bath tub was just an excuse for their dad to send her away. Charles reveals that she wanted to wear dresses and that their father couldn’t deal with it. CeCe is a transgender.

CeCe then reveals that their brother and father are not dead. They’re just temporarily paralyzed, just like Mona was when viewers thought A had killed her. The death of Toby’s mom is also explained. Bethany let Charles try on girls’ clothing when they were hanging out on the roof. As Marion Cavanaugh (Toby’s mother) came outside, Charles was scared and told Bethany she couldn’t see her in female clothing. Bethany ended up pushing Ms. Cavanaugh off the roof and blamed Charles. “No one believed the boy wearing the dress.” We then find out that their Mrs. DiLaurentis paid someone off so that people thought Toby’s mom’s death was a suicide.

We then find out that when Charles was buried, CeCe thought that she would finally be accepted, but her mother just took her back to Radley as “Charlotte.”

The liars then realize that there is more than one “A” and that CeCe has brought her family back to Radley and is going to blow up the building with them all inside.

CeCe talks about how it was gross dating her brother, but she had to do what she had to do. She also talks about hitting Alison on the head with a rock thinking that she was Bethany. Devastated and thinking she had killed Alison, CeCe and her mother buried Alison. Mrs. DiLaurentis pays off the police again. And, Mona then reveals to the girls that she actually killed Bethany.

It’s also revealed that CeCe had hired Rhys as a decoy. And, CeCe tells Alison that she befriended a drugged up Mona in Radley, who actually thought she was Ali because of the amount of medication she was taking. She had Mona tell her all about the girls.

CeCe reveals that she was so angry to hear that the girls were happy that she was gone. She also talks about Redcoat. She says she noticed a blonde in a red coat that would watch the girls and she tells Alison that it was Sara Harvey, who helped her. It’s also revealed that Sara was Black Widow.

The girls figure out how to break out of the control room and try to save Alison. Mona decides to stay behind because she wants to know “how the story ends”. CeCe talks about going home and finding their mother dead. She says that their mother was the only person who ever really loved her. Upon saying that, the alarm goes off and the bomb activates. Sara has armed it and is waiting for the girls who have disarmed the bomb.

The scene then cuts back to the roof and CeCe decides not to jump. She tells the girls, “Game over.”

For the end of the finale, the girls are all leaving town except for Ali. The show then skips to 5 years later and all the girls return to Rosewood to warn Alison, who is now a teacher. They all tell Alison that “he” is back and coming for her. 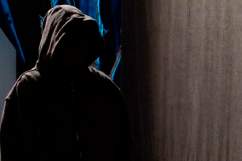 Who Is A On ‘Pretty Little Liars’: Charles DiLaurentis PLL Theories