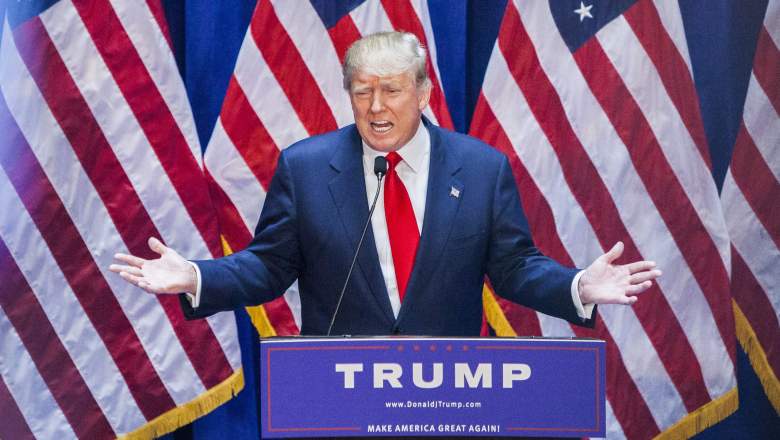 Donald Trump is running for President of the United States in the 2016 election and has been making some waves with his controversial approach. He’s one of the wealthiest men in the country and many wonder how much money Trump actually has … So, how much does Trump make? Trump has an estimated net worth of $4.5 billion. Check out all the details on how he makes his money, what he spends it on and more in our 5 Fast Facts below.

Donald Trump has a salary of $60 million and makes his money through his many real estate ventures, his various brands and his successful reality show The Apprentice. Unfortunately, because of Trump’s controversial comments about the Mexican community, NBC has decided to cut ties with Trump. This means that Trump will no longer be a part of The Celebrity Apprentice.

2. Trump’s Net Worth Is Actually Under Debate

In one hour I will be making a major announcement from Trump Tower. Watch it live on Periscope!

While many sites like Celebrity Net Worth report that Donald Trump has a net worth of $4.5 billion, his wealth is actually up for debate. When Trump announced he was running for President, he released an estimate of his personal fortune which showed his net worth to be $8.7 billion. In his estimate, Trump valued his personal brand at $3.3 billion, while others report his brand to be worth somewhere between $50 – $100 million.

In 2011, Donald Trump purchased Microsoft co-founder Paul Allen’s Boeing 757 private jet for an estimated $100 million. Trump later renovated the plane, covering it in gold as well as his logo. Check out his jet in the above video.

4. He Has Several Multi-Million Dollar Homes

Donald Trump has many homes from Manhattan to Miami. When in New York, Trump lives in the penthouse of Trump Tower on Fifth Avenue. According to Business Insider, his penthouse has a gold and diamond-covered door, an indoor fountain, a hand-painted ceiling, and a decadent chandelier. The estimated value of the apartment is $50 million. Check out the penthouse as it’s featured in an episode of Celebrity Apprentice in the above video.

Trump also owns the Mar-a-Lago estate in Palm Beach, which he bought for $10 million, lived on for 10 years and then turned into a private club. Trump has a 213-acre property in Bedford, New York, which is called Seven Springs and is the home for Trump’s wife Melania and young son Barron. Trump reportedly paid $7.5 million for it. Business Insider also reports that:

In 2011, Trump bought the final portion of fallen socialite Patricia Kluge’s Charlottesville, Va. estate. He paid $6.5 million for the 23,000-square-foot mansion after buying the vineyard and winery for $6.2 million months earlier.

Prior to the recession, the value of the vineyard was $70 million.

5. Melania And Donald Trump Had a Million Dollar Wedding

When Donald Trump married Melania Knauss in 2005, the couple had a million-dollar wedding even though they married at the Mar-a-Lago Estate in Palm Beach, Florida, which Trump owned. They married on January 22, 2005 and Melania wore a Christian Dior gown that cost $125,000. According to About Entertainment, the flowers cost $500,000 and celebrity guests included Regis Philbin, Kelly Ripa, Katie Couric, Hillary Clinton, Matt Lauer, Rudy Giuliani, Simon Cowell, Star Jones and Barbara Walters.