Tracey McShane is the wife of Jon Stewart, a man who has amassed a net worth of $80 million. But, she’s successful in her own right as well. Read on for the details on Stewart’s wife below.

McShane and Stewart each went on a blind date for the first time and met each other. According to the Huffington Post, one of McShane’s friends fixed her up with Stewart and they met at a Mexican restaurant. Apparently, McShane almost didn’t show up.

With the help of New York Times puzzle editor Will Shortz, Stewart proposed to his wife by using the crossword puzzle. Shortz included marriage proposal clues in the puzzle, all of which had special meaning to Stewart and McShane. 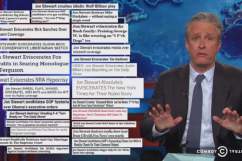 Jon Stewart’s Last Night on ‘The Daily Show’: What to Expect

3. Recently the Couple Bought a Farm To Use As an Animal Sanctuary

Of course Jon Stewart's wife would write this book and donate all proceeds to Farm Sanctuary. http://t.co/Ox7NN7JlgP pic.twitter.com/i8rs59mVXK

Tracey discovered Farm Sanctuary and became devoted to the animals. In turn, she got her husband and family involved in the case, even having a segment on The Daily Show dedicated to the cause. Recently, Tracey and Jon Stewart purchased a farm in New Jersey with the purpose of providing a home for farm animals rescued from cruelty. Tracey even revealed that, “Promises of animal shelter visits in exchange for completed homework are the norm in the Stewart household.”

On the Farm Sanctuary website, Tracey is quoted saying:

The joy of interacting with animals as friends instead of using them for human consumption is life-changing. A trip to Farm Sanctuary should be on everyone’s to-do list, but you can also bring a little bit of sanctuary home when you sponsor an animal through the Adopt a Farm Animal Program.

To thank Jon and Tracey for their support, Farm Sanctuary has named two rescued sheep Jon and Tracey. Tracey is an animal advocate and former veterinary technician.

4. Stewart Plugged His Wife’s Book On His Show

Listen to the final episode of The Daily Show Podcast without Jon Stewart… WITH Jon Stewart! (Seriously, he's on this one) Link in bio.

In the closing week of Stewart’s show, he was sure to promote his wife’s book, saying that:

One of the great pleasures of this show is having a pulpit to introduce an audience to books I care about – books I love. I’m going to miss that. And so before I go, I’m going to do it one more time. I have found this book by this incredible young author. Her name is my wife. The book is about my wife’s journey in finding her passion to work with animals, about how you can improve your relationship with the animals in your house and in your yard.

It’s incredible. I’m so proud of her. Listen, I’ve always known my wife is a kinder and nicer person than I am. But to know that she is funnier and a better writer — I’m not going to lie to you — stings a little bit.

McShane’s book is titled “Do Unto Animals: A Friendly Guide to How Animals Live and How We Can Make Their Lives Better.”

5. McShane Has Two Children With Stewart

In 6 months, #JonStewart's kids will be telling their dad to "get a effing job". Via @denisleary #DailyShow pic.twitter.com/6mlr3f4497

Read More
Celebrities, Jon Stewart, The Daily Show
Check out all the info on Jon Stewart's wife Tracey McShane, his kids, his family and also his net worth.