Tonight is the MTV Video Music Awards, also known as the VMAs, and Miley Cyrus is the host of the big event. Some of the celebrities scheduled to appear at the awards include Kanye West, who is receiving the Michael Jackson Video Vanguard Award this year. Additional stars in attendance include Kylie Jenner, Taylor Swift, Britney Spears, and many more of your favorite music artists.

For all the information on how to watch the show online, read on below for all the best live stream details.

MTV has a free live stream available called “All Access”, which allows the viewer to watch the show live online, but to also see bonus performances. Click here to check it out. According to MTV, viewers will get to see un-aired audience shots, backstage coverage, and bonus performances on an exclusive camera stream. Go to allaccess.mtv.com during the show to watch an extended set from certain performers. MTV’s multiple-camera stream online begins on Sunday at 6:00 p.m. ET.

Watch the VMAs on Mobile for Free With the MTV App

In addition to watching the show live on the app, MTV provides the user with additional footage and coverage of the show as well.

VMAs 2015: When Are the MTV Video Music Awards? 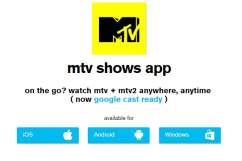