In a new interview with Elle UK, pop icon Miley Cyrus comes out as a “pansexual,” and now the little-known word is trending like crazy. So, we’re here to answer the question, “What is a pansexual?”

1. Pansexuals, aka Omnisexuals, Feel Love or Attraction Toward People of Any Sex or Gender Identity

2. Pansexuality Is Not the Same Thing as Bisexuality

For more information on bisexuality vs. pansexuality, please click here, as the terms can be widely interpreted.

3. There Is a Pansexual Flag With Its Own Colors

The Pansexual Pride Flag was created to increase visibility and recognition for the pansexual community. It has three colored horizontal bars of pink, yellow and blue. The blue represents those who identify within the male spectrum (regardless of biological sex), the pink represents those who identify within the female spectrum (regardless of biological sex), and the yellow portion represents non-binary attraction — such as androgynous, agender, bigender, genderfluid, transgender and intersex people.

4. The Term Is Credited to Sigmund Freud, but It Originally Had a Different Meaning

The pan prefix stems from the Ancient Greek term meaning “every” or “all,” while omni is Latin, meaning “all.” Pansexual comes from the word pansexualism, which dates back to 1917. Pansexualism at the time was a concept describing the ubiquitous influence of sexual instinct in all human activity. The term, often credited to Sigmund Freud, originally meant “the pervasion of all conduct and experience with sexual emotions.” 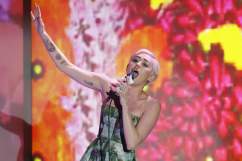 Miley Cyrus’ Pansexual Dating Life: Does She Have a Boyfriend or Girlfriend?

5. Cyrus Says She Is Not in a Relationship

Sitting down with Elle UK, Cyrus labels herself as a pansexual, saying:

I’m very open about it – I’m pansexual. But I’m not in a relationship. I’m 22, I’m going on dates, but I change my style every two weeks, let alone who I’m with.

In recent years Miley has become a vocal LGBT activist, and her ability to make pansexual trend today is more evidence of the young star’s power as an agent for social change and understanding.