Hilaria Thomas first met Alec Baldwin in February 2011. The native of Majorca, Spain, graduated with a degree from New York University, and was working as a yoga instructor in New York City when she met the actor at the Pure Food and Wine restaurant. They started dating almost immediately, moved in together six months later and officially tied the knot in a star-studded ceremony on August 23, 2013. Now, with her husband's career in Hollywood as strong as ever, with a guest appearance on Best Night Ever With Neil Patrick Harris slated for September 22, the new Mrs. Baldwin has also been forced to find her way in the spotlight. Click through the gallery to see some of her best social media moments and learn more about her career and relationship with Baldwin. 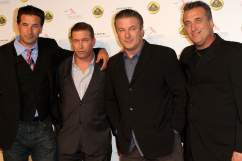 Read More
Alec Baldwin, TV
With her husband in the announcer's chair on this week's episode of Best Time Ever With Neil Patrick Harris, learn more about Hilaria Baldwin.