Brooks Ayers is the big topic of Real Housewives of Orange County this season because he claims to be suffering from cancer. Vicki Gunvalson has stood by his side defending him for months and months, but his illness has still been doubted by her cast-mates. A psychic on the show told several of the women that he didn’t see Ayers having cancer. Then, cast member Meghan King Edmonds contacted his doctor’s secretary, who supposedly told her that the doctor doesn’t treat cancer. She also contacted an ex of Ayers who told her that he had faked cancer on a prior occasion. While Shannon Beador, Tamra Judge and Heather Dubrow tried to stick by Gunvalson during this, they too began to have their doubts. Ayers had not taken Beador up on her offers to visit a doctor of hers while Dubrow stated she previously went to Ayers’ doctor for a cellulite treatment. Cast member Edmonds explained to People that:

Every single person thinks what I am verbalizing. The general hypothesis is that, for example in last week’s episode, I go to the doctor because I have a lump and I need to get it checked out. You see that in the episode, but there’s really no follow-up because it was an infection. Well, what if I said, ‘It’s not an infection but cancer.’ No one can disprove that, and there is actual evidence of it starting somewhere because I did go to the doctor. It’s a real thing, but if I wanted to let that story grow legs I could because no one can prove it. I think that’s what might have happened with Brooks.

[As for] the answer to the question ‘Does Brooks have cancer?’ I don’t think so, but I can’t disprove that.

According to Brooks Ayers, there will be proof that he has cancer shown by the end of this season of Real Housewives of Orange County. 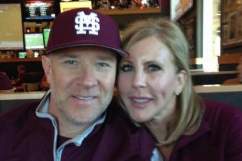