Who is getting eliminated on tonight’s episode of Dancing With the Stars, airing at 9:00 p.m. ET/PT tonight? The first couple announced as being in the bottom were Gary Busey and Anna Trebunskaya. The second couple was Victor Espinoza with Karina Smirnoff. In the end, the contestant who was voted off this week was Victor Espinoza.

Yesterday, the two couples who were in jeopardy were Chaka Khan with pro Keo Motsepe and Gary Busey with pro Anna Trebunskaya. In the end, Chaka Khan was sent home. Even though Busey was in the bottom, he did improve a lot from week one. Another contestant who got the lowest scores in week one was Kim Zolciak-Biermann. However, her fans pulled her through and she greatly improved in her performance last week. Then there’s jockey Victor Espinoza. He doesn’t quite have the rhythm that we’d hope for, but he makes up for it in personality. And lastly, Paula Deen is a little bit of a mess though she is a very energetic woman. Does she have the fan base to carry her far in the competition? 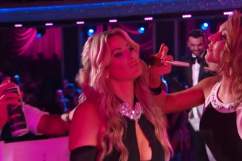 Kim Zolciak-Biermann Pulls It Together on ‘Dancing With The Stars’

Chaka Khan Eliminated On ‘Dancing With the Stars’ Tonight

Read More
Celebrities, Dancing With The Stars, DWTS, Reality TV, TV
Any idea who will get eliminated on tonight's episode of Dancing With the Stars? Will Gary Busey, Victor Espinoza or possibly Paula Deen be voted off?