Extant officially wraps up its second season on Wednesday night with a pair of back-to-back episodes titled “Double Vision” and “The Greater Good.”

In the first episode of the night, Molly (Halle Berry) finally gets through to the GSC and explains the true circumstances of Shepard’s death. This, however, won’t go over well, thanks in large part to the actions of Fiona and Lucy throughout the season. Lucy continues to try and make a move at power, but her ambition is so strong that she affects both the humans and the hybrids.

Then, in “The Greater Good,” things continue to spiral with the fate of the entire human race on the line. Molly and JD (Jeffrey Dean Morgan) continue to battle with their own romantic entanglements as they try to stop a Humanich plot that would drastically alter the entire world. Ethan is also put at risk after Lucy makes a shocking realization that puts her at odds with the GSC and questions her allegiance to them. 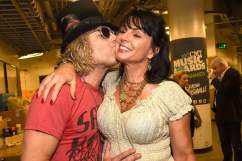