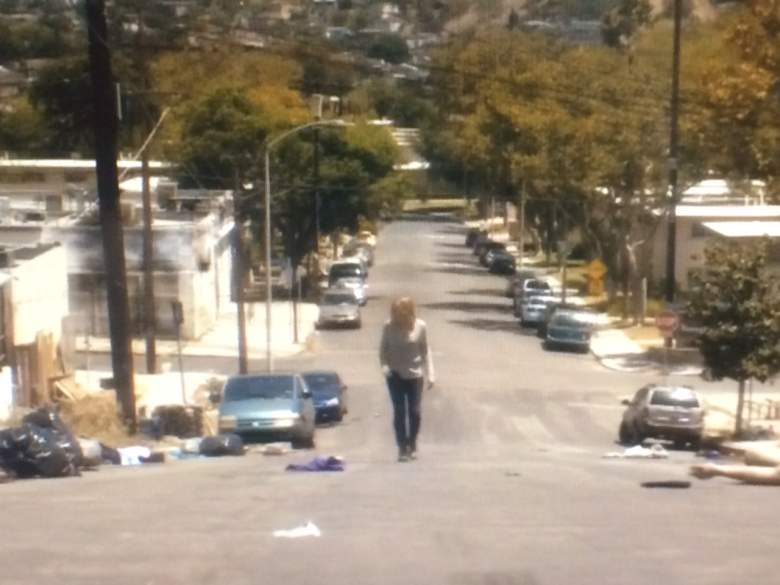 Things are starting to fall apart on Fear the Walking Dead, and Madison and Travis are right in the center of it. (Fear The Walking Dead)

Roles are shifting and some characters who seemed so in control last week are pretty much losing it this week. With a big twist in the beginning, the episode continues to surprise us for the whole hour. Who’s going to make it out alive after today? How many references to The Walking Dead can they throw into this episode?

When we ended the episode last week, the military was moving in to take over. Well, now it’s nine days since the world fell apart and everything is completely different. The episode starts out with a very out-of-place montage that almost had me believing that we had gone back in time. Nick is sunbathing in a pool, the picture of perfect health. Travis is jogging around the neighborhood, waving at people. But then we see Daniel tending to Griselda’s broken foot, and we know that we’re still right where we left off last week.

Their neighborhood has been fenced in, guarded by the military. Something about this seems…familiar.

Chris is on the roof recording a vlog that will never go online, telling the story of what’s happened. Another house has burned down, he says. The last people outside the fence were taken several days ago. They were “herded like cattle into trucks, one suitcase apiece.” The rumor is that they’re headed east.

But the picture every viewer is getting is of something far, far worse. Herded like cattle into trucks? That’s never a good sign.

While he’s talking, we see a house with a big X on the side that reads CATF/Bio Haz/2/4.

“It’s safe inside the fence,” Chris tells us. “Outside everything’s dead and everyone’s gone.” But as soon as he says this, he’s proven wrong. Someone in a house on the other side of the fence is using the sun’s reflection to signal him in Morse code.

Unfortunately, no one on the show knows Morse code. :( 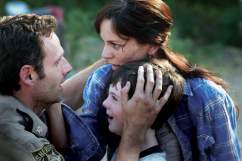 Did Carl Appear On ‘Fear The Walking Dead’?

The last couple weeks, we’ve had hope for Madison. She killed a zombie already. She was ready to kill Susan The Zombie until Travis stopped her. In fact, Travis seems to be the only thing that’s holding her back. But in this episode, all the ground that Madison had gained was wiped away in one argument.

Their city has just been overrun by horrifying walking dead creatures that tried to kill her and her children multiple times. The power’s gone, there’s danger at every turn, and the world is changing. So what is Madison complaining about?

Sick people in her house. Oh, and too much housework. (/facepalm)

Madison’s wanting to repaint the family room over and over is understandable and very symbolic. But whining about an ICU in her daughter’s bedroom after Daniel saved Travis’s life, then whining about having to cook and clean because Travis isn’t around enough… Well, it’s only been nine days, Madison. Really. I can’t help but think about how gratefulThe Walking Dead comrades would be for all of this. But then I remember where we left them last season and how decidedly ungrateful some of them are… Maybe Madison and Rick are a future power couple?

In the very next scene, Travis is very Travis like and refuses to believe Chris when he says there’s something alive beyond the fence. “There’s no way the government would lie to us EVER!” 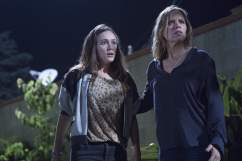 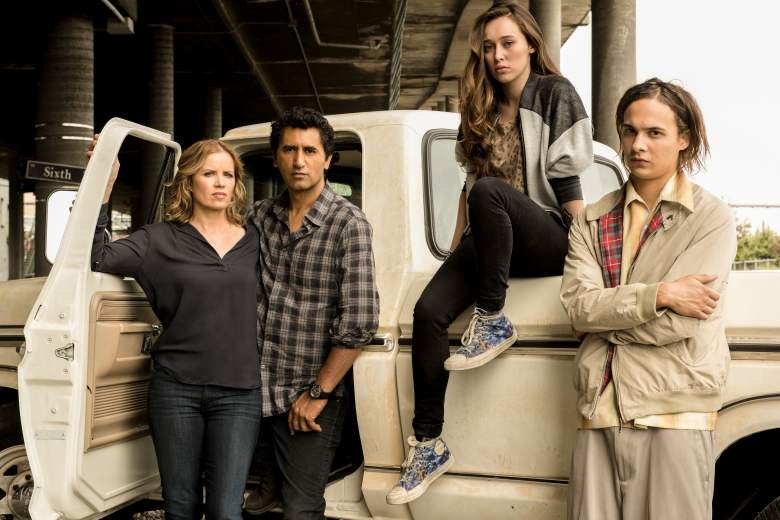 Travis may be the main thing holding this family back in Fear The Walking Dead. (Frank Ockenfels 3/AMC)

We learn that there’s a six mile radius around the town that’s been secured and they’re on the offensive now. But anyone who tries to compromise the camp will be detained. The military talks about a new mandatory health screening and how they are one of 12 safe zones in the region. Below is a map of some of the safe zones, courtesy of a thread on Reddit: 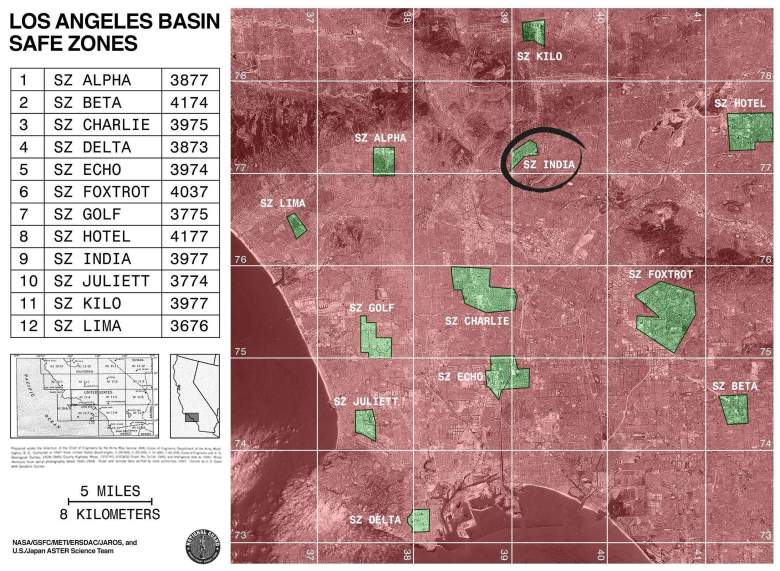 This is when we get a peek into Travis’s love affair with authority. Travis doesn’t want to take much authority himself; he’s much happier taking orders. So he’s trying to buddy-buddy up with the military so they can tell him what to do and he can pretend he has influence. The CO talks to Travis and tells him that one of the neighbors, Doug, won’t do the health screening. Can Travis talk to him? Travis balks at this because it involves responsibility and a small degree of authority. The CO rolls his eyes and levels with him: “Either you go in or I will go in and take him down.” Travis likes being bossed around, so he agrees.

Doug is hiding in the bathroom, overwhelmed. Travis convinces him to at least pretend to be OK, for the sake of his family, and so Doug submits to the screening. Unfortunately, this doesn’t work out so well in the end, since Doug freaks out later that night and the military takes him away.

Next, we get quick cuts to a few scenes that let us know how the various characters are doing. Alicia is taking things really hard, understandably so. Susan The Zombie was like an aunt to her and the sign that her boyfriend drew on her arm is fading away. She takes a knife and cuts the sign into her arm. This way, she’ll always have a scar and she’ll never forget him.

Liza, meanwhile, is serving the role of a nurse and helping out the sick people in the community. She’s got a man on a ventilator hooked up to morphine, and Nick sneaks in after she’s gone and takes some of the morphine drip himself.

Chris tells Madison about the signals. Later, Madison wonders aloud if the military hasn’t set up the phones because they don’t want the phones to work. Because she’s questioning authority, Travis freaks out. He doesn’t want to encourage that kind of crazy talk. In fact, Travis trusts authority so much that he oh so helpfully tells the CO about the signal coming from the house on the hill. Nothing bad could possibly come from that decision. 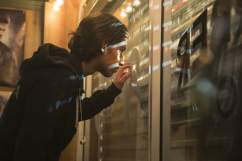 Fear the Walking Dead Episode 3: The Tweets & Reactions You Need to See 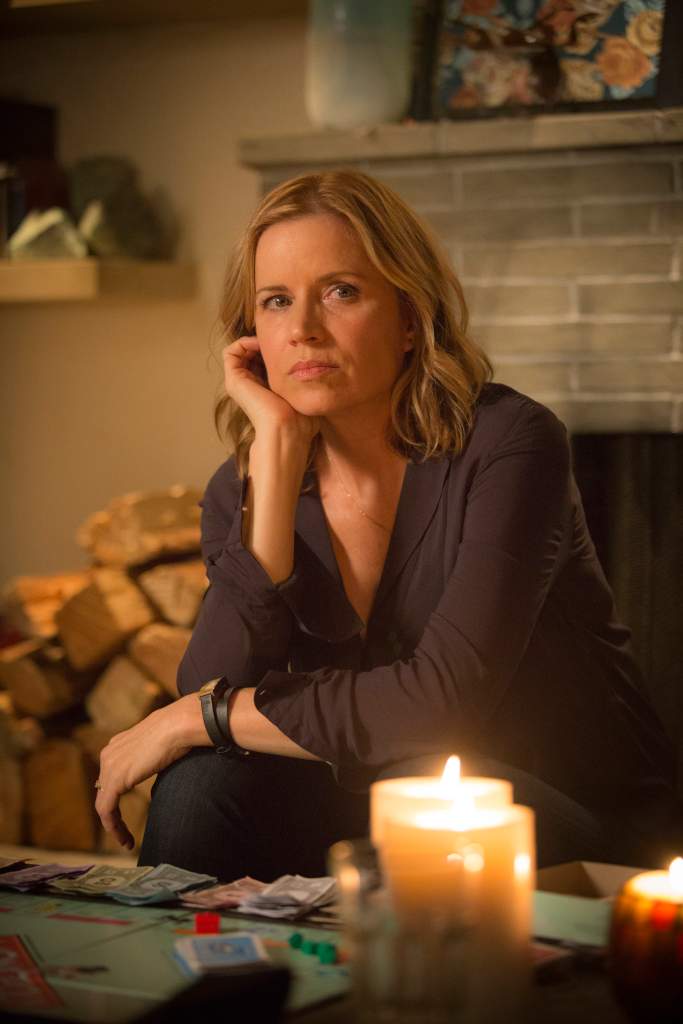 Without her game of Monopoly, Madison just might lose it. (Justina Mintz/AMC)

Madison decides to sneak out of the fenced-in neighborhood. Rather than cutting through the fence in a spot hidden by trees and bushes, she chooses an open spot where anyone could see her. No one does, luckily, and she gets out. What we see next is haunting and a stark contrast to the order and civility that’s been preserved in the neighborhood. Dead bodies are everywhere. Graffiti says in all caps: “NO EVAC!” Patrols are out in full containment suits, and Madison has to hide next to a dead body so she’s not spotted.

We start hearing about a health facility with a surgeon just a few miles down the road. Hector and his wife were taken there. Griselda needs to go there for surgery. It all sounds very ominous, no matter how pleasant they try to make it appear.

Madison later explains to Daniel that a lot of the people who were shot outside the perimeter weren’t even infected yet. He tells her a story of when he was in El Salvador and the government took some people away from his village. His dad insisted they would return. Well, they returned all right — as dead bodies that washed up in the river while Daniel was fishing. His father told him that men don’t do things like that because they’re evil, they do evil because of fear. And that belief, Daniel said, made his father a fool.

So chalk one more up in the “Travis Is Going to Die” Foreshadowing List.

Meanwhile, Madison realizes that Nick was stealing drugs from Hector and she literally beats him, leaving a bruise on his face. Then she gets drunk, because irony.

That last few scenes are chilling. Daniel and Griselda are ready to leave to go to the facility. But rather than taking Daniel, the authorities drag away Nick too. Liza accepts the doctor’s invitation to join them, so she can help somehow and keep an eye on Nick. Meanwhile, Alicia reads a letter that Susan left for Patrick. She thought what was happening was unnatural, but it was actually prophesied, godly, and overdue.

The last scene is Travis’s worldview about authority crashing with reality, as he sees gunfire erupting in the little house on the hill. 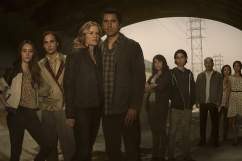