Uh oh. Is the amazing Khloe Kardashian hit with another cheating man in her life? According to MediaTakeout, Khloe’s boyfriend James Harden has cheated on Khloe with a stripper named Nelly Wit Da Jelly. Harden was allegedly photographed sitting next to the bed of the Philadelphia stripper and the photo was almost immediately deleted from her Instagram account after it was posted. A source told Radar Online that when word got to Kardashian:

They had a terrible fight after Khloe confronted him and demanded the truth about who he’s been seeing behind her back. James isn’t the type of guy who’ll sit back and take sh*t, and they really got into it. He threw it back in her face the fact that he knows she’s been creeping around behind his back with her ex [Lamar].

A source also tells Radar that Khloe is still stuck on ex-husband Lamar Odom, which may have been causing a rift in her relationship with Harden. The insider states:

James really put her in her place – she was the one calling all the shots, but she doesn’t know what she wants. One week she wants his baby, the next she’s having second thoughts about Lamar, then she wants to be exclusive, then she doesn’t, he has no idea where he stands with her, nor is he the kind of guy who likes drama around him. 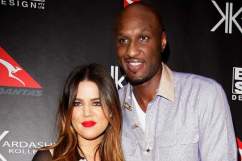