On last night’s episode of Dancing With the Stars, Nick Carter had a little slip at the end of his performance, giving new meaning to “kicking off the show.” Even so, he didn’t let that stop him and he ditched his shoes after his dance with partner Sharna Burgess. The judges praised him for embracing the dance and not letting the slip up affect him too much.

Backstreet Boys star Nick Carter is definitely one of the major contenders on the show for season 21. For week 1, he closed the show in an awesome performance and tonight he has his second performance on the week. This is the first time in DWTS history that the contestants have to perform two routines in the second week of the season. That’s a lot to remember for these newbies.

Check out Carter’s performance from last night’s show in the above video. 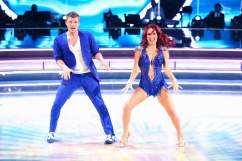 Nick Carter on ‘DWTS’: The ‘Dancing With the Stars’ Contestant to Watch

‘Dancing With the Stars’ Season 21 Cast: Who Are the Contestants?

Read More
Celebrities, Dancing With The Stars, DWTS, Nick Carter, Reality TV, Sharna Burgess, TV
Last night, Nick Carter had a little slip and fall on Dancing With the Stars after his DWTS performance. Check out how he saved himself.