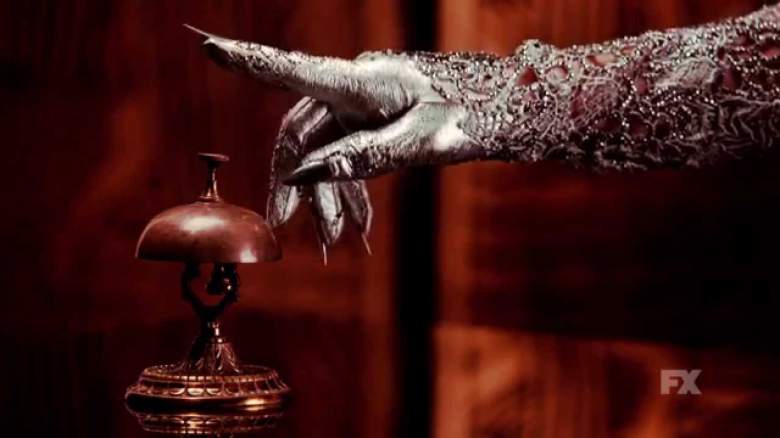 The episode opens up with Sally digging in a sewn up mattress, finding the junkie Gabriel who was raped by the addiction demon during the show’s premiere. She kisses him and tells him he cannot cheat death, sewing him up into the mattress. Sally hears screams through the vents in the room and finds Iris in a room with the young, blonde children feeding on a victim. Liz Taylor rolls the body down the hallway to the maid who complains about the blood stains on the sheet. The body is shoved down a chute and lands in a pile of other bodies.

In the next scene, the children are all hooked up to IVs while watching cartoons. Their blood drips into a decanter that Iris brings to The Countess for her to drink with Donovan. Donovan hides from his mother and The Countess closes the door in her face. While Donovan expresses that he wants to stay in and watch House of Cards, The Countess expresses that she wants to go out and hunt. She ventures out in an incredible red dress.

Detective Lowe’s wife Alex, who is a doctor, makes a house call to a sick boy with the measles and she argues with his mother about how she should have gotten him vaccinated. In the meantime, Detective Lowe is asleep at Hotel Cortez. The alarm goes off at 2:25 a.m., as usual. Lowe awakens, turns off the television, which is on and he notices what looks like a camera. The maid comes in and asks if he’d like a “turn down” and he says no. Suddenly, the image of the Addiction Demon flashes in his mind and he sits up abruptly. He washes his face in the bathroom and notices something strange about the shower. He opens the shower curtain and finds what appears to be two dead people having sex. They reach out for him and, again, he wakes up abruptly. What’s dream and what’s reality? He takes a sip of water and looks down the hallway, seeing his son Holden, who he chases into the hotel stairway. Lowe frantically runs around searching for his son. He winds up in the lobby and his son is nowhere in sight. Sally’s sitting at the bar and asks him if he’s looking for someone. He replies, “no” as Liz Taylor serves Sally a drink.

Sally starts talking about how she lives at the hotel and reveals she used to write poems. She talks about her sad life, saying she got lost. She comes close to Lowe and tells him he looks like he wants to get lost. Lowe opens up to her about his job, telling her about his worst day, finding dead children in the home of what appeared to be a murder-suicide. He realizes that the father didn’t murder his family, that he had come home and found his whole family dead from carbon monoxide poisoning. He then killed himself. Lowe then talks about the day his son Holden disappeared … He then tells Sally that he “can’t afford to get lost.”

Detective John Lowe is at the office and receives a package that appears mysterious, so he has the building evacuated and calls in the bomb squad. He finds an awards statue in the box and decides to have it tested for DNA.

Naomi Campbell is a fashionista from Vogue magazine who greets Will Drake at Hotel Cortez, where a fashion show set up is underway. Detective Lowe’s daughter is dropped off at the hotel to see her daddy. Drake introduces her daughter to his son, who has been influenced by The Countess. Sally tries to get into the fashion event and is denied entry. She then spots Lowe’s daughter Scarlett and backs away quietly. As the fashion show begins, Drake’s son tells her that he may show her something after the show.

The show begins once Donovan and The Countess take their seats in the front. In the meantime, model Tristan Duffy is breaking up pills and sniffing them backstage. His nose, in turn, begins to bleed. Donovan and The Countess are checking out the models while Lowe and Drake’s children sneak off. Duffy struts down the runway, rips off his tie, grabs a woman’s champagne, kisses a woman in the audience, and slaps a man. Just as he goes to pick up a piece of glass from his champagne spill, he catches The Countess’ eye. Donovan becomes jealous as The Countess is intrigued by Duffy’s rage. Drake goes backstage and tells Duffy that the show is not over. Duffy cuts a slash in his face and says that he’s done with modeling.

In the next scene, Scarlett and Drake’s son are exploring what appears to be an empty pool. In the pool are glass coffins with the blonde children inside. Drake’s son says that nothing wakes them up and he knocks on the glass of Holden’s case, which is Charlotte’s missing brother. Holden’s eyes abruptly open.

Donovan comes across Duffy going through his suite that he shares with The Countess. Donovan tries to kill Duffy, saying that he’s made a rule to stay away from junkies. The Countess stops Donovan and Duffy flees the room. He takes the elevator, which goes dark and gets stuck. Duffy forces the elevator doors open and he starts walking down dark hallways. He comes across what appears to be an uneaten room service meal. He takes a bite and realizes he’s eating a rat in the sandwich. Duffy ends up in a room, turns off the music that is playing on the record player and he begins to go through all the belongings in the room. He’s greeted by the hotel’s original owner Mr. March, played by Evan Peters. March tells him to take anything he’d like. He tells Duffy that he’s just like him. March tells Duffy he’ll show him what he’s been dreaming of. The maid then brings in a woman who is tied up and March tells Duffy to shoot the girl with his gun. March then reveals his own throat is cut as Duffy refuses to pull the trigger. March shoots the girl and Duffy runs out of the room. When Duffy makes it to the elevator, he is greeted by The Countess who pulls him to her.

Next, little Scarlett has returned to the lobby to find the show is over. She then goes back to see that the glass coffins are empty. She finds herself exploring back hallways of the hotel and makes her way into the white game room where the children play. She finds her brother Holden. She shows Holden a photo of their parents and asks him why he hasn’t grown up. She tells Holden that their parents will be so excited to see he’s alive. When Scarlett goes to take a photo with Holden, he goes to take a bite of her. She immediately runs away and Sally grabs her in the hallway. Sally laughs and grinds her teeth together as they break and begin to bleed. Scarlett screams and runs away.

In the next scene, Scarlett appears to be walking down the street at night and there are police everywhere. She walks into her home and her parents are frantic after not being able to find her for hours. Scarlett then tells her father that she saw Holden at the hotel. Lowe immediately gets angry. Scarlett yells back at him that she’s not a liar and that she even took a photo of him. Lowe’s wife blames him. As Lowe looks at the photo, the image of Holden is blurred.

Duffy and The Countess are shown together in the next scene and Duffy is flawless. The Countess has brought him into her world and now he is immortal. The two have sex in the bathtub in an erotic scene. The Countess then gives Duffy tips on what kind of blood to drink. She says that the sun won’t kill him, but it should be avoided. The Countess then tells Duffy not to fall in love and don’t get caught. She says the love has to be saved for her. The Countess tells Duffy about her past and her favorite time periods. In the 1970’s, she says, “We were all vampires back then.”

Donovan interrupts Duffy and The Countess and says that he won’t last a week. Duffy leaves the room and Donovan closes the doors behind him. Donovan is highly upset that The Countess turned Duffy. She says that she never wanted to hurt him and that there’s no reason their relationship has to end badly. Donovan tells her he loves her and she tells him that she loves him as well, but that the heartbreaks make their existence better. She then tells Donovan to pack his things. He becomes angry and tries to win her back, but she is undeterred in her decision.

Detective Lowe makes his way back to the hotel and handcuffs Iris. Iris tells him that he’s seen things and she’ll tell him what he wants to know if he takes off her cuffs. Iris and Lowe sit at the bar and Lowe asks Iris “what’s really going on.” So, Iris tells Lowe about Mr. March, who built the hotel. In 1925, a contractor doesn’t understand the plans for the hotel, so March tells him that he has the new plans in his office. The two men take the elevator to March’s office, where he opens up his vault and then stabs the man in the neck. He shoves the body down a chute. Iris explains that March had designed the perfect building with no exits and secret chutes to dispose of the bodies. March had built a hotel that was designed as just a large torture device. He reportedly forced his wife to watch the torture. Miss Evers, the laundress, was his loyal minion.

We see March killing innocent victim after innocent victim. He even rapes a woman while slashing her to her death, which gets him off. Iris describes March as sloppy and said she thinks his wife turned him in because she inherited his millions. The police arrive at the hotel and Miss Evers warns Mr. March. Without a word, Mr. March retrieves a knife and a gun. Mr. March asks Miss Evers if she’d rather die with him by knife or by gun. She decides she’ll go first and requests the gun. She then asks March to do her the honors of making her his last kill. March shoots her in the head and then slashes his own throat as the police break into the room.

The show flashes back to the present and Lowe doesn’t believe that Iris is telling the truth. Iris reveals that room 64, where he is sleeping, was March’s office.

In the next scene, Lowe is back at the office and the DNA results trace the blood on the award that was in his package back to the crime scenes that they’ve been investigating. Lowe then starts to research March, comparing the murders to those of Mr. March. He realizes that someone is carrying out the ten commandments in their killings.

Duffy sits in the lobby going through his phone, picking someone to kill. A bearded man who he selects online comes to the hotel to find him. Duffy begins to make out with him in the elevator and bites his lip. The two get rough in the bedroom and The Countess walks in. The victim tells Duffy that he isn’t into women. They kill him and Duffy drinks his blood while The Countess pleasures herself. Duffy and The Countess then begin to have sex on top of the dead body.