Tickets for Star Wars: The Force Awakens, episode seven in the saga, are on sale now. They were originally slated to go on sale immediately after the new Star Wars trailer aired during ESPN’s Monday night football game, which was supposed to happen during halftime. But the timing ended up changing and tickets went on sale earlier. Fandango was one of the first sites to offer them.

If you’re planning on buying a ticket, you’ll also want to know which theater is the best for seeing the movie. And if you’re looking for a special event or the marathon showing, you’ll want to find a theater that’s participating.

Here’s everything you need to know about picking the best theater to watch Star Wars: The Force Awakens.

1. Star Wars Should Be Seen on a ‘Real’ 70MM IMAX Screen If Possible

Only one sequence in Star Wars: The Force Awakens was filmed using an IMAX camera, but it was a “good sequence” according to J.J. Abrams, Cinema Blend reported. The action scene may be the escape scene from the desert planet Jakku, according to Cinema Blend.

If you want to see the movie in IMAX, look for “real” IMAX, experts recommend. Real IMAX theaters are the eight-story screens that present the full 70MM experience. Digital IMAX theaters “shrink” the film into a converted format, Cinema Blend reported. Digital IMAX is still good, but it doesn’t give you the full experience. If you’re not sure if the theater near you has a real IMAX screen, just call and ask.

As far as 3D, sources are a little mixed. Cinema Blend reported that the movie is being filmed in 2D, and it will be converted to 3D post-production. However, Making Star Wars reported that this isn’t the “gimmicky” post production 3D that some people complain about. Two 70MM prints will run through the IMAX projector to play true IMAX 3D.

2. If You Don’t Want to Deal With Lines, Get Your Tickets at a Theater That Lets You Reserve Your Seats

If you don’t want to deal with the hassle of having to show up at your theater really early in order to get the best possible seats, then buy your advance tickets at a theater that lets you reserve your seats. For example, DBox seats — where the seats move during a movie — are always reserved in advance. Some theaters, like some owned by AMC, have special reclining seats where you pick exactly where you’ll be sitting. An theaters that also feature meals, like iPic, almost always let you reserve the seat location, too. If you’re not sure, call your local theater and ask.

3. Some Theaters Will Be Hosting Marathon Events And Show All Seven Star Wars Movies

If you’re a die-hard fan, then you might want to see the movie at a theater that’s hosting a Star Wars marathon event. These theaters will show all seven movies. The first six will be shown in digital 2D and The Force Awakens will be shown in 3D. You’ll also get a special lanyard with Star Wars marathon art, Star Wars reported. You can see a full list of theaters that are participating in the marathon event here. They include theaters all over the United States.

Other theaters will host special premiere events to celebrate the newest Star Wars movie. You can find full details on the Star Wars website here. For example, AMC will given an exclusive Star Wars print to everyone who sees the movie in IMAX 3D between December 20 and January 10. At Regal Cinemas, the first 500 guests to see the show in IMAX every day between December 19 and January 9 will get a collectible ticket. Cinemark will give away ReadD 3D Star Wars glasses if you attend the marathon event on December 17 or the first showing.

Meanwhile, El Capitan Theatre will show a costume display, props, and a lightsaber laser show. Even Fandango is participating by entering ticket buyers into a sweepstakes to see the world premiere and giving people who buy within the first 24 hours an extra chance. Ten runners up will get a prize pack.

Some Alamo Drafthouse locations will offer an exclusive collectible pint glass for an extra $10 and collector’s magazine for an extra $5 to advance ticket purchasers. However, a poster on Reddit reported that some Drafhouse locations may be doing even more, such as hosting a pre-show and offering unique menu items. Call your nearest location for more details.

The First Order is coming. Tune in to Monday Night Football on @ESPN for a new look at #TheForceAwakens. https://t.co/BbPQZ1cjBo

Tickets were slated to go on sale as soon as the newest Star Wars trailer aired, which was scheduled to happen during halftime of ESPN’s Monday night football game. However, tickets actually went on sale earlier at some sites, including Fandango, where they are available now. It was originally estimated that tickets would go on sale around 8:15 p.m. Eastern, The Verge had reported. Advance tickets already went on sale in the UK and in Mexico, and in many locations the tickets were sold out fast. You’ll want to be one of the first to purchase if you’re buying online, because in the UK, many online sites crashed because so many people were trying to buy tickets at once,  KMBC reported. 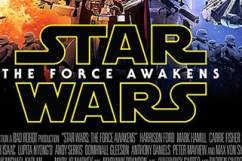 How & Where to Get Tickets for ‘Star Wars: The Force Awakens’