You made my entire week! Thank you a thousand times, I can't wait for Monday night. Love you so much @iamvalc ??

Bindi Irwin said goodbye to her hottie pro partner Derek Hough on Dancing With the Stars and said hello to another sexy pro. Val Chmerkovskiy, who is officially paired with singer and reality star Tamar Braxton, has been put together with Irwin for DWTS‘ “switch up” challenge. In turn, Hough is dancing with contestant Alexa PenaVega.

Last week was a very emotional performance as Irwin dedicated a contemporary routine to her father Steve, the late Crocodile Hunter. It was truly a heartbreaking routine, that earned Irwin her first 10 of the season from the judges. It was also an emotional week for Chmerkovskiy’s official partner Braxton, who dedicated her performance to her husband.

Tonight’s routine will be a little more upbeat and fun since Irwin and Chmerkovskiy are dancing the Cha Cha. 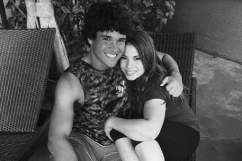