Does Brooks Ayers really have cancer? Did he hit on ex-girlfriend Vicki Gunvalson’s daughter? Why do Briana Culberson and Ayers hate each other so much? In the past, Ayers has been taped, drunkenly telling Culberson’s husband Ryan he should hit her to straighten her out. He’s admitted to cheating on Gunvalson while they were together and now his cancer diagnosis has been questioned. Gunvalson has revealed that she has lied for Ayers when it comes to some of the facts surrounding his diagnosis. In addition, Culberson, who is a nurse, said that when she questioned Ayers about his treatments, he admitted to having pancreatitis rather than cancer. Culberson says the disease can be caused by abusing alcohol.

On the Real Housewives of Orange County reunion, Culberson reveals more information about why she hates Ayers. She says that Ayers hit on her while she was pregnant, trying to show her his penis. Meanwhile, Ayers has told Andy Cohen that Culberson is manipulative and a shit-stirrer. He also stated that Culberson has “Daddy issues.”

According to Culberson, now Ayers has threatened to sue her as she posted this message online:

Just found out my mom’s creepy ex boyfriend wants to sue me because he doesn’t remember hitting on me while I was pregnant at my mom’s birthday party! He’s done worse sh*t that’s never even been exposed on the show. He’s a loser … He’s nuts! … All that matters is … he is GONE!

Culberson finished her message by saying, “Bring it tool!”

Gunvalson’s online response to all the commotion surrounding Ayers and her daughter was this:

My daughter and I are amazing. Lawyers are involved and I can’t speak about it in detail. All will be ok in time. Thanks for your concerns. 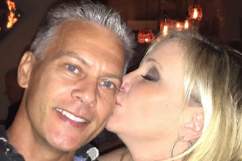 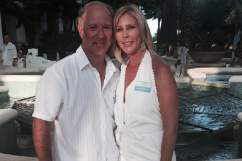 Does Brooks Ayers Really Have Cancer?