Are dream couple Taylor Swift and Calvin Harris broken up? According to Radar Online, Swift dumped Harris about a week ago after photos of him exiting a Thai massage parlor surfaced. Radar reports that Harris’ initial explanation was that his masseuse was unavailable and he needed someone to work on his shoulder. An insider told Radar that Harris actually has his own masseuse on staff there. In addition, Harris had wanted to try to mend the relationship and fly out to one of Swift’s shows, but her assistant reportedly told him “no.”

Despite the break up rumors, Harris was showing Swift support on Twitter just a couple days ago when her GQ cover came out. He favorited her tweet of the cover and according to Us Weekly:

The “How Deep Is Your Love” DJ favorited Swift’s tweet of the cover, as well as a previous post by one fan’s Twitter handle, @LetstalkaboutTS, which showed Swift’s dual GQ and NME covers side by side with the caption, “When @CalvinHarris is a lucky dude.”

So, do you think this is actually the end of Harris and Swift’s relationship? Will Swift be writing some new music about Harris soon? 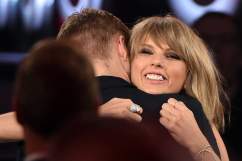