Who got eliminated on Dancing With the Stars tonight? Sadly, we had to say goodbye to … Hayes Grier. This was a huge shock. Grier has such a huge fan base and he has been doing so well in the competition, so this elimination was indeed a surprise. Even tonight the judges told Grier he stood out among his team members. This is sad news for Hayes and Emma fans.

It was the Halloween episode, which made for some delightfully spooky routines. Plus, this was the first episode where there were team dances. The first couple announced as being in jeopardy was Hayes Grier and Emma Slater. The second couple announced as being in the bottom of the votes was Tamar Braxton and Val Chmerkovskiy. Lastly, was Alexa PenaVega and Mark Ballas.

Hugging his teammates and fellow contestants, Grier tried to fight back tears as the unfortunate news began to sink in. Watch the surprise elimination below. 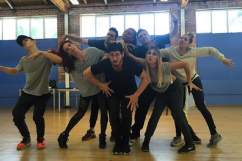